I encountered this intriguing monument while driving around searching for road rally destinations a decade or so ago. 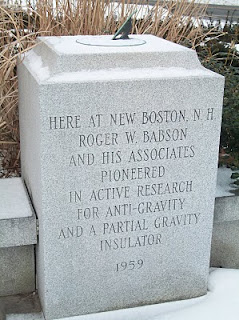 Have I told you about road rallies? They figure prominently in AVI history. Teams of four per car solve puzzles leading to destinations, at which there is a bit of information that allows you to answer a question before moving on to the next puzzle. Most answers right in the shortest amount of time wins the game. I think I shall have to cover all that in some detail in another post. Some of you might find this to be right up your alley.

Back to New Boston. One’s first thought is that this is some complete crank, squirreled away in a rural NH town, which the town fathers might not want to memorialize. Imagine this guy at town meeting every March. Or offering to guest lecture at the science classes at the high school. But in fact, Babson was a brilliant and respectable character. He was the founder of Babson College in Massachusetts, and two other colleges as well. The curriculum sounds like a precursor to Northeastern’s cooperative education program.

Believing experience to be the best teacher, Roger Babson favored a curriculum that was a combination of both class work and business training: businessmen made up the majority of the faculty instead of academics, and the institute’s curriculum focused more on practical experience and less on lectures.

Babson had gone to MIT, wrote books, founded businesses, and believed that economic cycles followed highly predictable rules because they were subject to laws as physical as Newton’s laws. This is now regarded as a rather crankish theory, but Babson did predict the stock market crash of 1929 and the Great Depression.

His pseudoscientific notion, that the laws of physics account for every rise and ebb in the economy, had no more validity than [astrology or alchemy]. But just as astrology gave birth to astronomy and alchemy to chemistry, so, too, did Babson’s efforts to explain the economic cycle… lead to the economic breakthrough that revolutionized the business of economic forecasting.

He moved to New Boston for his antigravity research because he felt it was far enough away from cities to be safe from nuclear attacks. (When the USAF turned a local bombing practice field into a satellite tracking station in 1959, it likely undermined that supposed nuclear-target safety.) Babson came to focus on gravity shields or insulators pretty quickly, believing that true antigravity was a concept too far out of reach.

The Gravity Research Foundation never did a lot of research, existing mostly to sponsor conferences where papers were delivered and concepts discussed. Some heavy hitters in the world of theoretical physics came up for these conferences. There was not only Babson’s respectability in other fields, but a sense at that time that particle physics and the understanding of gravity and the other forces was so odd that even strange-sounding ideas might prove out – or at least lead to something that could be used. The foundation still gives yearly prizes for papers on gravity, and Stephen Hawking won a few of those early in his career, as did 2006 Nobel Prize winner George Smoot. As Hawking is now claiming that the existence of gravity provides sufficient explanation for universes to come into being, requiring no additional gods or forces, it may be that gravity is the one thing that you can’t anti- or shield in this universe. But what’s out there for theories at present – strings, a 2D universe, teleportation, and time-reversal – antigravity no longer seems any crazier.

A note on Hawking’s new theory, BTW. I don’t see how it changes the philosophical consideration of the existence of gods, or first causes, or other prior forces in the slightest. The question is between something existing and nothing existing. If gravity exists, how? The positing of a self-existent deity may be no less of a puzzle, but it certainly isn’t any more. Hawking has pushed the time and physical principle lines farther back, so there is no reason (if he is correct) to demand that some outside force entered Right There to create the universe. But the same question remains. It doesn’t imply much of anything about a deity with personality, and nowhere near a Christian God, but to say “your self-existent creative force doesn’t have to exist because we’ve found some other self-existent creative force” is rather silly. Rather like the old joke that Shakespeare never wrote all those plays – it was someone else named Shakespeare.