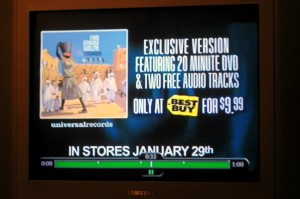 A while back I was watching a television show that I enjoy called “No Reservations” with Anthony Bourdain when he traveled to Crete and Greece when I saw something completely astounding on television – an advertisement for the band “The Mars Volta” and their new disc, a CD that I actually went out and purchased (still don’t understand it yet).

Why was this astounding… because despite being a semi-avid disc buyer for decades the advertisements that I have seen were usually useless and not directed at me; but for once the record business actually targeted a show I’d watch with an ad that I would have responded to. So for a brief glimmer, an instant, I could see what some of these thousands of non-musicians that make up the music industry do and how it could add value.

ABOUT THE MUSIC INDUSTRY

Over the last several years the major record labels have been undergoing constant layoffs, restructuring, and mergers in an attempt to re-invent themselves in the digital age. There are four “major labels” today which control about 80% of the industry, with independent labels covering the rest.

In this article, EMI announced recent plans to lay off 2000 staff members, approximately 1/3 of their work force. The EMI layoffs are on top of other job losses over the last few years detailed here, along with another doom-and-gloom summary of declining CD sales and closing record stores.

When I read the interviews about how the industry is contracting and CD sales are falling, the first thing I think is “so what?” The music industry is eerily similar to the newspaper and publishing industry, where career employees tangential to the mission bemoan their fates.

In the simplest model, there are three parties to the music industry:

Note how 2) is in the middle between the artist and the fan… in the way, so to speak. The artist wants to create music (and make a living, and meet girls) and the fan wants to hear new music that they like. The record company brings everyone together, and for a long time they had a clear role to play.

In the days of record albums and pre-internet media, it took some decent logistical capacities to design, record, and distribute records all around the country. Media outlets were expensive and advertising required some level of sophistication and funding, and radio was independent and required grooming.

After records they innovated and moved on to the cassette which was more portable (for the car, the boom box, and the walkman) and everyone bought the same stuff all over again. When the disc came out, at a prodigious price (almost $20 in 1980 dollars which probably would be about $40 today) everyone bought them again, to hear high quality music in a format that was supposed to last forever.

At about that time, the industry stopped innovating and making things easier for the fans. Even though CD costs plummeted, the record labels resisted reducing the costs; essentially pressing a CD and distributing one is nearly free, but prices didn’t fall hardly at all. Remember the core concept in economics that marginal revenue = marginal cost… as the cost (of incremental units) moves towards zero, the revenues should expect to move in the same direction.

On a parallel front, music information became ubiquitous. When I talk to my nieces and nephews, they get all their music information (and most of the songs) from the internet, through blogs and myspace. The value of the record company is completely invisible to them; distribution is free, information is everywhere, and songs are free while CD’s (if you can find them) are an expensive pain in the rear.

A third front was the advance of DIY capabilities; anyone can create their own music with digital tools that are cheap and readily available. A friend of mine from high school was an engineer and worked on many big-name acts; he left the business because most of the work (except for the main producer and engineer) is moving to Pro-tools and away from human intervention.

To some extent it is amazing that the industry has lasted as long as it has; for most fans it is basically an impediment.

THE MODEL UNDER SIEGE

A few more critical holes have emerged in the music industry model. The Eagles released their new album only at Wal-Mart… and it became a big success. In this model the whole returns / shipping problem is resolved because Wal-Mart obviously can successfully stock this CD and ensure wide distribution. According to this link the album has sold over 4.6M copies using this model, without any record company help at all.

Meanwhile, Radiohead put their new album online and let customers “name their own price” which could be as low as zero. This one really had the record companies scratching their heads… but for Radiohead the cost of distribution is very low so even if customers only pay a fraction of what they would at the CD store they are still coming out ahead. The Economist wrote an article speculating that Radiohead realizes that music is a “free good” and they are competing with peer-to-peer versions, so fans will salve their conscience by paying what they believe the album is worth.

I recently bought “The Slip” which is the new Nine Inch Nails album. This album came out for free, like Radiohead, except that there wasn’t even a “name your price” option… the only price was zero. I liked the album a lot and have been listening to it a lot on my iPod Shuffle when I work out. At the site (www.nin.com) they have the album available in many formats, including high quality MP3 files as well as formats I don’t even understand… but they are much larger in size which implies that their quality must be very good.

In the past 1/2 the band Gnarls Barkley (the DJ, Danger Mouse, not the strange looking singer) made his name by releasing “The Grey Album” where he took the lyrics from Jay-Z’s “Black Album” and combining it with the music from the Beatles “White Album”. This CD was released out on the Internet for free, scooping up lots of free press and rave reviews.

Not coincidentally, these bands are all headliners (or top draws) at Lollapalooza here in Chicago in August. They are obviously doing well playing live and the fact that they are releasing their music for free online isn’t seriously impacting their ability to make a living in music. They are clearly making the choice to get their albums out to fans cheaply (or free) and then to make money playing live and selling merchandise, which is difficult to bootleg.

Also – bands like Ghostland Observatory are being started “from scratch” without label support. They have appeared on Conan O’Brien and other shows and produced and sold their own CD’s. They also have only 2 band members (which is far cheaper than a big entourage) and travel lightly which gives them a lower point to break even on touring.

Beyond the fact that you’d expect revenues to move towards marginal cost over time (i.e. zero) for incremental copies of individual music tracks, there are other negative incentives at work.

Dan, my blog-mate, indicated his surprise at the fact that the new REM album was recognizable and good, as opposed to the somnolent stuff that they’d been producing the last few years. Why is this? Why did R.E.M. suddenly change their style?

R.E.M. signed a giant deal in the 90’s (after the success of many albums, including Monster) and then proceeded to create navel-gazing records devoid of hits. The albums sold fewer and fewer copies each time, but R.E.M. didn’t care, because their (huge) revenues were guaranteed in the 5 album deal. R.E.M. blamed bad music trends and online file sharing but clearly they also contributed to their anemic sales by abandoning their immediately recognizable style that earned them fans in the first place. Stipe found lots of time for random liberal causes, and these didn’t do anything for sales.

Once the big deal was done, however, R.E.M. had to actually “earn” their living by creating music people wanted to buy. Hence, their new album actually has songs that someone might want to buy. You can’t afford to jet-set around for your favorite causes unless some big capitalist enterprise is paying the bills, after all.

The music industry is fighting back by signing “all inclusive” deals with bands such as this one (they will get traffic, unlike R.E.M. so I am not naming them) where the label supports the band but then gets a share of CD sales, online revenues (ring tones), concert revenues, and merchandise. This model gives both the band and the label similar incentives, which are to get out there and earn money. The likely problem with this model is 1) you need to start them early, so it takes years until they make money 2) it is likely more expensive than just signing up front for nascent acts 3) established bands won’t “switch over” to this model unless you pay them an enormous amount of money.

Given that the costs of creating music have plummeted, it is logical that the revenues from music will also decline. A new generation of fans has been created that doesn’t expect to pay for music… and this will be impossible for the industry to reverse.

On the other hand, concerts and merchandise still have a lot of appeal, and these are difficult to bootleg (the people likeliest to view the concert are also likely to attend). Thus musicians will start moving into these areas in order to make their living, and whatever they make from iTunes or CD sales is more or less gravy.

The label doesn’t have a lot to add in this model. They can help produce the record and provide marketing support. But what is this worth? A lot of bands can promote themselves on the Internet, and music venues in cities across the country are hungry for bands to fill their schedule, and they can help with promotion, as well.

Like newspapers, they need to re-invent themselves to add value. Unlike newspapers, who can claim to a “public interest” in researching stories, the labels don’t necessarily have any redeeming social values. They are middlemen, and they need to make money for their investors. They will need to pare back their services to what makes money, and add value to their relations with artists. This likely will result in a far smaller number of people at the major labels unless they can find a way to recover the vast riches that they lost when CD sales began falling.

3 thoughts on “The Music Industry”