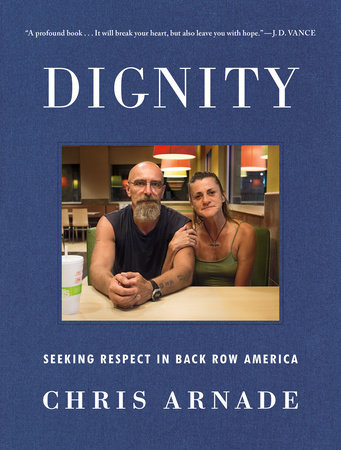 Chris Arnade certainly seems to have been called, and may well have been chosen, to help mitigate one of the great divisions of our time. Dignity complements, among others, Charles Murray’s Coming Apart with interviews and photos from what Murray would call “Fishtown,” or rather its extreme margin, whose inhabitants are simultaneously transient and rooted, strategizing to survive in ways often incomprehensible to the more cognitively gifted and emotionally stable. Learning to extend compassion and respect rather than mere pity (in its more negative variant), glib political “solutions,” and outright contempt is a challenge far too few Americans are willing to undertake. Matthew 22:14 seems unnervingly relevant in this context, and while the church as it is depicted among the people Dignity portrays is an overwhelmingly positive influence, more “front row” believers might take a moment to consider just how much better than the vast majority of us Arnade, a secular liberal, has done at reaching out to desperate communities. My advice to them is to buy and read this book, pray over it, maybe lend it out to others for discussion, and—without reinventing the wheel—do the Tocquevillian thing and organize/volunteer, with an eye to Luke 15. Because if the parables in that chapter aren’t about “back row” people, they don’t mean a damned thing.

I inadvertently got myself partway off the hook a few years back by becoming involved with a recovery ministry, a sort of Celebrate Recovery lite, in a church located within walking distance of at least two large rescue missions on the east side of downtown Kansas City. 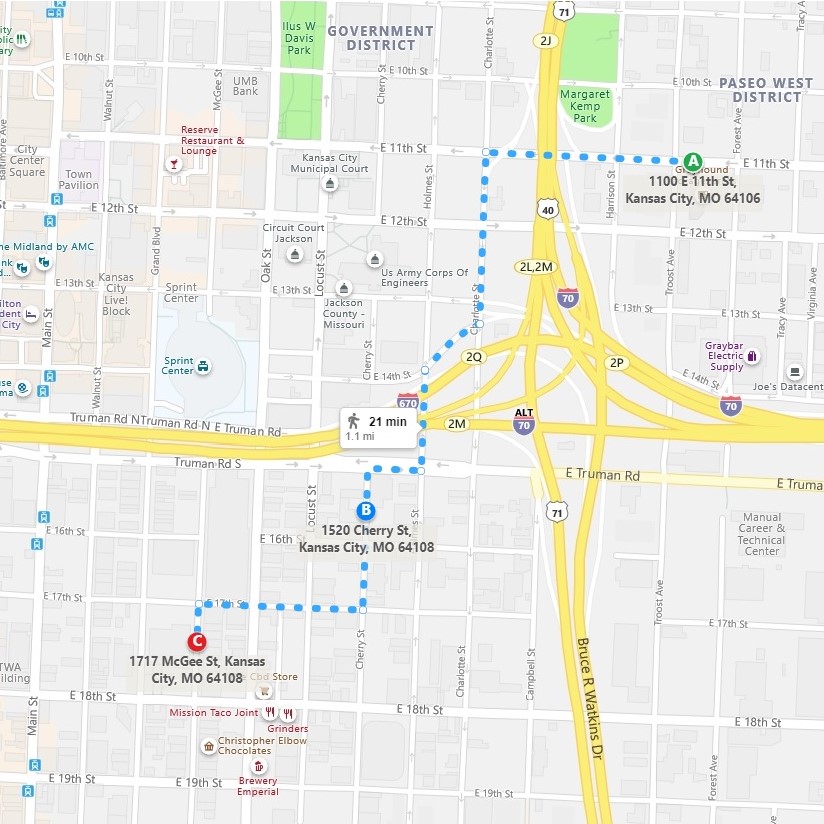 Weekly meetings are early Wednesday evenings and include a meal. I first showed up to meet, and afterward assist, an attendee who was working on installing a couple of new WAPs, running cable for terminals and printers, etc. I immediately decided to incorporate it into my routine, by way of running a sort of weekly emotional-sobriety checkpoint, although I do not have a background of substance abuse (I did my 12-step time in 2½ years of ACOA meetings at the end of the ’80s). Regular attendance had what usually results from enough hanging around and appearing useful, and I now buy the pizzas and deliver the message about every third week.

The audience has shifted somewhat over the years to mostly guys walking over from the missions or even just from a homeless camp somewhere. This has allowed me to hear quite a few stories of the general type recounted in Dignity, although the attendees are more transient than many of the people Arnade interviews. I’ve noticed a couple of different tripartite divisions, one by diagnosis, and another by consequences.

Diagnostically (according to me, so … rather informal), the extremely down-and-out generally are, or have been, one of three things: a large majority of garden-variety depressed, with lots of self-medication with booze and dope leading to life on the street; paranoid, complete with claiming to be victims of the Shadow Government or belief in pretty much every conspiracy theory ever, often non-compliant on medication, sometimes unwilling to sleep inside a building; or schizophrenic, which usually just means chattering away in a manner indicating, shall we say, lack of proper awareness of context (like realizing that you’re inside a building and with other people).

The consequences are usually either 1) a gazillion DUIs and loss of driving privileges 2) prison time for more or less violent criminality or 3) becoming an RSO (registered sex offender), which is effectively a life sentence. One of the ways I know how tight the labor market is, at least in KC, is how many of these people are nonetheless employed.

Obviously these are not exclusive lists, and there can be various overlaps. I wish I could report a high success rate in men who enter programs at the missions, but it’s pretty modest, and I’m afraid a certain amount of “front-row-ism” is involved. Someone’s chances are a lot better if they, for whatever reason, have better impulse control, lower time preference, and higher time-on-task, especially in a classroom setting. They’re also better if they don’t become ironically dependent on an institutional setting and aren’t afraid to live outside of one.

This is where I should say that I’m almost certainly not seeing a truly representative sample, either. Very few Latinos—and no illiterates, which there have got to be given how much learning disabilities and foregone education characterize extreme back-row-ness.

In any case, programs at the missions can appear to emphasize re-integration into the economy—clean up, get a job, find a place to live, resume at least working-class consumption patterns. I don’t doubt that the people in charge are deeply compassionate and careful to promote good priorities, but there are moments when it all seems very American, in a not-altogether-inspiring way. C.S. Lewis seems to have thought more clearly about some of these things than most of us; in the third book of his Space Trilogy there is a character who, although he has a significant role among the good guys, is very much outside the system, basically a drifter version of Tom Bombadil. Lewis makes it plain that he not only tolerated but admired, at least in some instances, a lifestyle that middle-class Christians in 21st-century America would nearly uniformly regard as something badly in need of fixing.

I may therefore be a bit less libertarian in this respect than Lewis; in my defense, the Manifold Rescue Mission would, by way of implementing James 2:16 and Therapeutic Lifestyle Change, get them outside for a while every morning even if the weather was bad, put everybody on a Mediterranean diet (minus the red wine, alas), make them do calisthenics, and maybe hand out some melatonin. Socialization is going to happen anyway, at multiple beds to a room. Reading and math; reading aimed largely at whatever most people find enjoyable (for many men, that’s biography and military history), math at practical items first, like budgeting. Affective gains precede cognitive gains. Get them hooked on good things. If they end up aiming for the front row and all that comes with it, fine, but the great thing is, as mentioned above, emotional sobriety.

(I note that to the extent that living on the street means sunlight exposure and physical activity, it may feel more therapeutic to some homeless people than living in a shelter.)

The part I’d be worst at—admittedly the grand unsolved problem—is how to reach people who’ve been “back row” their entire lives, and have been told so from childhood. Because I’m front-row material. Notwithstanding the vicissitudes of the first decade of my adult life, I ended up with a career that left me tucked comfortably inside the uppermost decile of per capita net worth and can check the boxes: couple of properties, substantial investment income, even a reasonably well-funded private pension. If I have any redeeming facet here at all, it’s that rough starting decade, which is largely responsible for my relatively high score on Murray’s notorious Bubble Quiz.

Arnade, very much by his own admission, was a front row kid too, pretty much of a 1%er, actually. The somewhat fascinating thing statistically about Dignity is that although its subjects are purportedly just generally “back row,” suggesting the bottom quintile or perhaps decile, many of those he interacts with are in fact at the very bottom, with lifestyles characteristic of (my rough estimate) ~0.1% of the population of the KC metro. There are, of course, many more such people elsewhere; in small towns and Sun Belt cities where it never freezes, the fraction is quite a bit higher. But it is as though Arnade has quantum-tunneled through to his counterparts at the exact opposite end of the socio-economic status distribution.

Overall, I think the 1-in-100 “lost sheep” is about right, counting those who live in drastically substandard and/or illegally occupied housing. Thanks to plenteous technology, vast logistical capabilities, and functional institutions generally, they’re not starving. They’re not even lacking for entertainment. They’re just really poorly adapted to fulfilling activity in the society the front row kids built, a society which is very much an emergent phenomenon of generational temperaments. The egalitarianism of the America of the Boomers’ childhood has been massively eroded, as Murray documents, and it was the work of tens of millions of Boomers and Xers that eroded it. Not a relative handful of Congressional representatives or corporate executives (who, in any case, came from the general population). Glenn Reynolds has written that he thinks Dignity will “be one of the most important books of the year,” and we should hope so—for ourselves. “And in many more words he charged them and exhorted them, saying: Be saved from this crooked generation.” (Acts 2:40, Lattimore)

In this connection, Arnade’s best moment occurs at the bottom of page 282, where he says, essentially, get out more, and (without referencing it) invokes what I think of as Habit 5. Listen first, don’t push glib solutions, and let something constructive emerge from what happens next. A country with millions of people doing that—and thereby getting some Talebian skin in the game simply by virtue of entering into uncomfortable situations—seems far more likely to make real progress in this area than a largely self-segregated one.

This in spite of some pretty stereotypical political sentiments expressed earlier in the book. I seriously doubt, for example, that President Trump is either any better or any worse about racial attitudes than the average American; indeed he seems relentlessly average to me in many ways. But vaguely ritualistic commentary on Trump, or his supporters, or complaining about offshoring, is almost certainly the price of gaining attention from many of the front row Americans who Arnade ends up, well, charging and exhorting; too-clever students who often seem to be racing American society, or at least a noticeable part of it, toward an appointment in Samarra.

Back row people, like everyone else, should be honored without being idolized. Their own glib political prescriptions aren’t an improvement on the status quo, largely because they quite understandably have (to use another Covey term) a scarcity mentality. In the past 3 years, my fellow Missourians have voted: 1) 57% for Trump; 2) 67% for Prop A (repealed right-to-work); 3) 62% for Amendment 1 (prevents redrawing of “safe” minority districts); and 4) 62% for Prop B (imposed $12/hr minimum wage). The grim details, including county-level results you can copy into a spreadsheet and run the CORREL function against if you’re sufficiently motivated, are on the Secretary of State’s results page.

People like that aren’t going to be crazy about immigration, either; it isn’t much of a reach to guess that they really don’t want other back row people moving in. Ironically, a points-based immigration system would be pure front row. In anything like the present environment, it would mean even more snobbishness and mutual disdain and cultural bifurcation. Self-satisfied liberals should perhaps support it by way of adhering to a certain internal consistency; everyone else, not so much. Similarly, any protectionist measures—for other economic inputs besides labor, I mean—would create equally nasty positive-feedback effects. But the jumbo jets and container ships aren’t going away, not in the absence of a major war. Innovation and trade will not stop disrupting existing industries. The fantasy world of a mid-20th-century America will not return. Real forward movement will mean checking our attitudes at the door, whatever row we sit in.

Oh, the title of this post? From pp 111-112: “All that the front row offers to those living shattered lives in broken buildings is sterile institutions that chew them up and spit them right back out.
“These are institutions that they have to navigate like mice working their way through a maze. Each hour waiting in the hospital, or the courthouse, or the intake center, is an hour that numbs them. An hour of forms to be filled and absurd rules to be followed.”

Make no mistake: we need better process design, and a good rubric would be “how navigable is this by someone with an IQ of 85?” But start with empathy, and willingness to expose yourself to imperfectly managed risk.