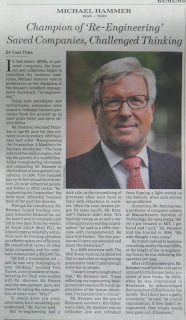 Michael Hammer, consultant and author of “Re-engineering the Corporation”, died recently at the age of 60. Mr. Hammer’s methods often involved mass downsizing as companies re-focused on efficiency and removing layers of management. If this were “The Onion” we’d probably make a snarky remark that Michael Hammer determined that he was no longer a productive asset and decided to re-engineer himself out of existence rather than being a financial burden on the corporations that he served.

All joking aside, Michael Hammer was an important man. At the time that his star was rising in the early 90’s, the US was in recession, and corporations were looking for new ways to restore profitability. His book, “Re-engineering the Corporation”, provided a methodology and a set of buzzwords for corporations and consultants to use as they reviewed operations with an eye towards increasing efficiency.

If you ever saw “Office Space”, then you saw a tongue-in-cheek but not too far off the mark view of the type of work that actually was bred by Mr. Hammer’s thinking. The consultants (The “Two Bobs”) bring in staff and ask them what they actually do all day, focusing on processes that don’t add any value (such as the engineer who describes his day-to-day activities which are clearly of little use, who then gets all flustered and shouts that he is “good with people”) or that are unnecessary management overhead (such as the “hero” of the film who says he has a dozen (?) bosses who each call him out over his failure to complete his TPA report).

Mr. Hammer was clearly the right guy in the right place at the right time. Many American companies still felt that employee loyalty was important and that laying off employees should be a last resort. A classical example of this was Motorola, where employees would be “Galvinized” (referencing both the founder and the fact that you were protected, like the metal) after a number of years of service.

These types of thoughts generally fell by the wayside as companies hacked at their staffs in order to reduce costs. The re-engineering side of the consulting view provided “air cover” because you weren’t just trying to do “more with less” (famously lampooned by Dilbert’s pointy haired boss), you were trying to eliminate activities and essentially do “less with less” by removing unneeded steps in the process. Thus reducing staff, minimizing the # of processes, and empowering staff (removing layers of managers) all led to the same result – a demand for the same “net” output with less staff and fewer managers.

Many academics and outside media commentators blamed Hammer for the outcomes (firings, layoffs) but he was merely a shield and rationale for companies that had to change their ways or else. In his obituary the final line was:

“But I don’t have a guilty conscience” he said “At a lot of organizations, if they hadn’t re-engineered, they simply would have gone out of business.”

He’s right, meaning that they had to cut costs to survive and try to be more efficient in order to make profits, but all of this would have happened anyways due to competitive pressures on corporations and the fact that the market eventually would have punished the laggards. If it wasn’t Hammer, someone else would have come up with a similar buzzword and been the standard-bearer.

It is ironic that Hammer was the lead consultant on all of this – after all, he is an engineer (note his use of the term re-engineering) while the vast majority of the changes were in the corporate support functions and not in the engineering and production areas. The engineering changes were driven by the lean supply chain dogmas and drive for quality – his consulting was focused on the support areas like finance, HR, and general management.