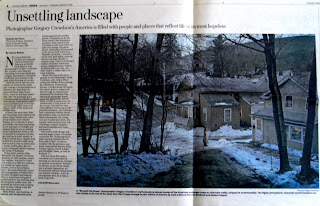 I am not an artist but I do try to appreciate art where I can find it. I visit museums and particularly like the Milwaukee Art Museum, with its famous rooftop “wings”. The site is almost as interesting as the art inside its walls.

Much art, however, is aimed at a strange insular world of elitists. The arbiters of taste for art are generally on the coasts and inevitably extremely liberal. To say that their tastes are out of the mainstream is a vast understatement.

This article, which I clipped from the Chicago Tribune book review about 6 months ago (sorry, it sat in my “blog folder” and I recently found it) inadvertently captures this elitist gap with a non-ironic subtitle:

While I think whoever wrote that subtitle (I guess it was Jessica Reaves, the author) has never been to sub-Saharan Africa or maybe she’d have a better perspective on what hopeless means, that quote perfectly captures exactly what they’re going for – the view from a glass tower high above those struggling souls in small towns and suburbs across America.

From looking at Mr. Crewdson’s bio he’d probably agree with that subtitle… but what leaps into my head is WHY this is something worth setting as a goal, except to subtly (or not so subtly) look down on the lives of others.

One day when the 2nd Iraq War was starting there was a protest march in downtown Chicago. I am still kicking myself because I didn’t have my camera with me as I walked by the local art school and they put a sign on the door saying that classes were canceled since everyone was over at the protest. But of course…

Wasn’t art supposed to challenge the status quo? But much of today’s art panders to the same sad stereotypes of Americans as dullard hicks living meaningless lives, unenlightened and far right. Probably the most “artistic” thing an artist in one of today’s schools could do would be to be a Republican – this would shock everyone far more than the usual antics.