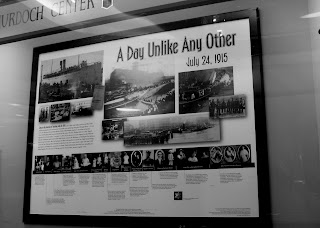 I can walk to work from a few different directions and I took a detour and headed south on LaSalle street. Just north of the Chicago River there is a refurbished office building with a large photo essay on the Eastland disaster. The S.S. Eastland was a passenger ship that capsized in 1915 and killed 845 passengers along the Chicago River (near where this building stands today). The exhibit is called “A Day Unlike Any Other”.

What does this essay say about America, and why are we “A Lucky Country”? As a history buff, when I see any date from the time period 1914-1918 only one thing leaps to mind – World War One. While the United States did participate in World War One, we declared war in 1917 and only had sizable forces on the ground for the 1918 German spring offensive and the subsequent Allied counterattack.

Thus while 1915 is “A Day Unlike Any Other” (and even the wikipedia page on this date, July 24, points to the Eastland disaster) in America, let’s put this in perspective.

According to the time line of World War One (a great service by wikipedia) for the year 1915, here were events near that date:

– the British and the Turkish forces fought “The Battle of Gully Ravine“, one of the brutal battles in the ill-fated invasion of Gallipoli pennisula, battles so intense that they helped to weld together the Australian and New Zealand nations and are still mourned as part of “Anzac Day”
– the Italians and Austrians (a German ally) fought pointless battles in the unforgiving terrain of the mountains that separated the two countries “The Second Battle of the Isonzo“. These DOZEN battles caused terrific casualties on both sides and were in a stalemate until the Germans intervened in 1917 in the rout at Caporetto which was part of Hemmingways “A Farewell to Arms”
– At this time the Russians began “The Great Retreat” of 1915 which had them leave Poland and Eastern Europe – their 1914 offensive had ended in a German victory (but had likely saved Britain and France from defeat because the Germans panicked and sent forces Eastward, weakening their thrust towards Paris). The amount of ground that was covered in this retreat is vast and hard to contemplate today given the primitive roads and infrastructure that existed at that time
– during this exact date the Western front armies, the British, French and Germans, were exhausted from their 1914 battles. The British were preparing for the Battle of Loos, which occurred in September 1915, featuring the first British use of poison gas (which fell back on their own lines) and typical WW1 slaughter for virtually no gain. In the notes in Wikipedia they refer to a movie about this battle called “Oh What a Lovely War” and per Wikipedia:

“The battle was referenced in the film Oh What a Lovely War. During the upbeat title song, sung by the chorus of officers, a scoreboard is plainly seen in the background reading “Battle Loos/ British Losses 60,000/ Total Allied Losses 250,000/ Ground Gained 0 Yards”.

Thus at the time that Chicago and all the US was contemplating the Eastland disaster, the Anzacs were dying on the shores of Gallipoli, the Italians were locked in the second of twelve pointless battles along Austria-Hungary’s borders, the Russians were ceding virtually all of Eastern Europe in an enormous retreat, and the British and French were preparing for another slaughter in the West featuring poison gas, trench warfare, huge casualties, and nil results.

That is why we are a lucky country.

9 thoughts on “A Lucky Country”