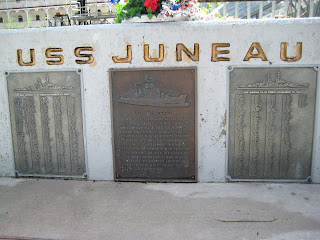 While visiting Alaska we toured the capital city Juneau. Juneau lies on a small flat section of land among towering mountain peaks and is very scenic. Along the water front huge cruise ships were moored, disgorging tourists to wander the local shops. So what catches MY eye…

A plague commemorating the USS Juneau, of course. The USS Juneau was a US light cruiser of the “Atlanta” class, and was relatively small in size. “Light” cruisers at the time generally carried 6 inch guns, and “Heavy” cruisers carried 8 inch guns (for comparison, battleships carried guns in the 14 to 18 inch range). The Atlanta class light cruisers had five inch guns, in twin mount turrets, and in some ways were just larger destroyers. On the other hand, they were revolutionary in that they were Anti-aircraft cruisers, similar to the British “Dido” class, which performed valuable duties especially protecting the Malta convoys which ran through heavy Axis air attack routes.< While I knew this right away it probably isn't common knowledge that the Juneau was the ship that, in a way, inspired the movie "Saving Private Ryan". The Juneau was the ship where the famous five Sullivan brothers all served as sailors. The Juneau was sunk by the Japanese off Guadalcanal in late 1942; the ship was struck by one of the powerful torpedoes and it sank quickly. Three of the brothers died when the ship sank and the other two died at sea while awaiting rescue. I did not realize it until I read the wikipedia site that the situation of the survivors was comparable to that of the Indianapolis, which was immortalized in “Jaws”, in that they were adrift at sea for several days before they were rescued, and that is why only ten survived out of a compliment of 700 sailors.

After this event, the armed forces started enforcing the “surviving son” policy which made sure that brothers did not serve on the same ship and that if enough sons were killed that the survivors were brought home or taken out of danger to the extent possible.

I guess this is what makes me a blogger… sitting in down town Juneau during a beautiful day and I am caught up thinking about World War II and all the impact from the sinking of this ship named after the local city.