I started working in Chicago in the early ’90s. At that time, we had a hangover from the ’80s building boom, with a number of completed but vacant buildings. Our firm moved in at 161 N Clark Avenue, the Chicago Title and Trust Building, which was almost totally empty at the time. I remember walking through the floors and around the halls to get a 360 degree view of the city. Later Accenture (the consulting firm) moved in and ultimately the building seemed to get totally filled up.

After the ’80s building boom which tailed off in the early ’90s, Chicago construction went dormant. Nothing significant seemed to get built for a few years since no one could put an economic case together for more building while so much was vacant.

In the late ’90s and into the ’00s, Chicago construction boomed again. Per this Chicago Tribune article,

For a decade now, Chicago has been on an astonishing building binge. Since 1998, developers here have completed or started construction on more than 195 high-rise buildings, according to the Emporis building database. (A high-rise is defined as a building at least 12 stories tall.) That’s more high-rises than there are in all of Detroit (132), St. Louis (106) or Milwaukee (83).

But now it is all grinding to a halt. Some sky scrapers are stalled for lack of funding:

Work also is frozen at 111 W. Wacker Drive, home to Chicago’s other stalled supertall skyscraper, the Waterview Tower and Shangri-La Hotel. (To be considered “supertall,” a skyscraper needs to be at least 1,000 feet high.) … the project is stuck on the 26th floor, its exposed concrete frame looming over Wacker … (the project requires more) than $300 million in construction financing to finish the job.

Here is a view of the construction of the Shangri-La from my window… note the other building still under construction on the left. 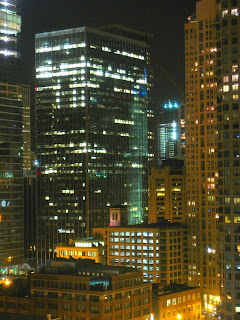 More from the article:

Since July, there has been no construction on the 16-story Staybridge Suites hotel at 127 W. Huron St … Although the building’s innovative structural frame is complete, the frame is not covered. And winter is coming, with its destructive snow and ice.

Here is a photo of this stalled construction project, also visible from my window. Note how construction continues apace on the tall building near the Hancock directly behind it.

This all reminds me of a story my friend Elton told me about a trip to Thailand. Apparently they abandoned a lot of half-constructed sky scrapers after the 1997 Asian currency collapse, and they still stand today, incomplete. This article contains an interesting video of a journalist reviewing these structures as they stand 10+ years after the event. I think that Thai weather is more favorable to these buildings than it would be in Chicago, where they would be subjected to snow and sleet. Even so, it seems unlikely that construction would resume. Here is the link to WSJ video on Thailand. 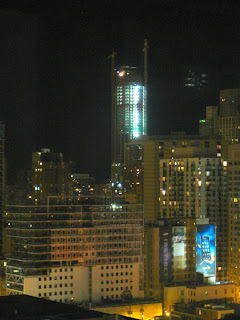 I do like to walk around town and see the firms that are financing the new towers that are going up, even today. These firms are very likely to see their investments ground into dust, and I find it astounding that they are still starting up new construction at this VERY late date in the business cycle.

Hopefully I don’t have to look at these half-built buildings for the next decade or so, like they do today in Bangkok.

3 thoughts on “Frozen In Time”