I’m writing this Chicagoboyz piece to clarify the moment we are living in with regards to the Techlords oppression of America’s 1st Amendment constitutional right to free speech on their social media platforms.

I’m calling it “Our 2020 Abbotabad Moment” (see photo) because, like the SEAL Team 6 killing of Osama bin Laden in Abbotabad Pakistan, it was a “Moment of Strategic Clarity“ about the nature of an oppressive & corrupt regime that cannot be unseen. 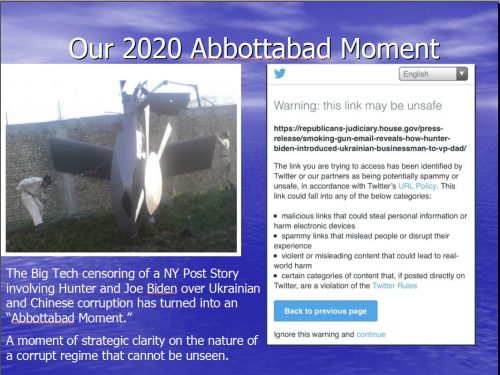 In Pakistan’s case, it revealed a nationalist, separatist, tribal, and above all a terrorist-supporting regime rent by murderous religious and ethnic hatreds. One where the one thing all the leadership factions there can agree on is fear of India. Think of a nuclear-armed Somalia in the mountains, but one good enough at faking a government to get military & economic aid from stupid foreigners.

By way of contrast,  Big Tech’s censorship of  the NY Post, the Trump campaign, Trump’s press spokeswomen, the GOP House Judiciary Committee and others, followed by the open endorsement of the “Free Press” on Twitter of these actions have showed we don’t have a “Free Press.”

They are the propaganda arm of an unelected & unaccountable elite that hates the American Republic.

I’d call these people’s disregard for free speech “Unamerican Activities” but, point in fact, they are as American as the Ku Klux Klan.  Or more on-point, the Pinkerton men putting down the United Mine Workers.  Complete with Denver Channel Nine’s hiring of a Leftist activist as a security guard who subsequently murdered a Trump supporter at a protest they covered.

If this were the movie “The Empire Strikes Back,” we would be at the point of the film where Lando Calrissian picks up the mike and says “Attention. This is Lando Calrissian. The Empire has taken control of the city; I advise everyone to leave before more Imperial troops arrive.”

Unfortunately, there is nowhere to run. The moment of strategic clarity the NY POST’s censorship has brought shows is this is no longer just a “9/11/2001 election.” 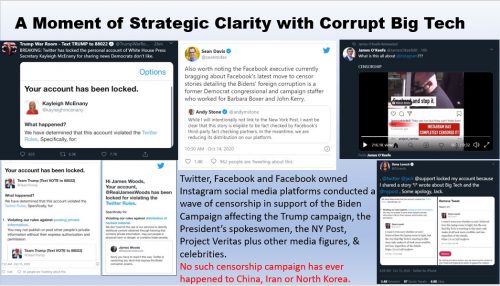 We are on Sun Tzu’s “Desperate Ground” with a choice of acquiescence to enslavement by inches, or a fight for freedom where absolutely nothing is guaranteed, even if you “win.”

And Sun Tzu advises that, on Desperate Ground…FIGHT.