Well, my fellow Texas, what have we learned from this disastrous week just passed? Quite a lot, actually – and many of us were reminded anew of those old habits acquired from having lived for a few years in places where winters are reliably ice-cold frozen, dark, snow-packed and last for months. The Army retiree ahead of us in the line to get into the grocery store on Wednesday reminisced with the Daughter Unit and I about such winters spent in less temperate climes, and we racked our collective memories about what had happened to the ice scrapers that we all were certain we had come to Texas with at least two decades ago. (I was sure that mine was somewhere in the trunk of the Very Elderly Volvo, which was sold ten years ago. Possibly the young motorhead who bought the VEV discovered the ice scraper – well, at least now he knows what it was for.)

It’s not that viciously cold, icy winters are completely unknown in Texas; such conditions are routinely experienced on a regular basis in northern Texas, where residences and civic practice are all accustomed to and prepared for such. Southern Texas very rarely experiences ice, snow, sleet; if anything, it’s more of a mild tropical or Mediterranean – hardiness zones 8, 9 and 10 on the USDA maps. Those bouts of below freezing in San Antonio most usually last only for couple of nights and a day. As for snow, the last two rounds of for-real snow melted on the ground almost the moment it landed, or at most, by mid-morning of the following day. If anything, our buildings, civic infrastructure, and public policies are oriented more towards the expectation of blistering summer heat for at least six months out of a year, and relatively mild and temperate conditions for the remainder, interspersed with the occasional hurricane along the coast. Our homes are insulated against the heat; during most winters my central heat barely gets more than a couple of days use. I’d say that most of my neighbors were expecting no more than a couple of nights and a day or two of bitter cold.

The snow began falling late Sunday night – six inches worth and it was cold enough to stay crisp and unmelting the next morning. The power went out in our neighborhood several times during the night and was out for most of Monday. It did come on again in the late afternoon, so that we could cook supper – but then it went out again for all of that night and most of the next day. We had power for a few short periods, but having the water taps suddenly stop running for more than a day; that was even more distressing than the power outage. Electric power and water came back late Wednesday afternoon for us, although the water was in a gradual dribble at first – and we are advised to boil it before drinking. The water is still out in some areas, but I did get a message from the power company that they anticipate any remaining outages to be resolved by the weekend. Like most of our neighbors, we were not totally in a bind: we had a small propane heater and a propane griddle with some nice accessories so that we could cook and make tea and coffee, we had gallons of bottled water for drinking, my daughter could start up her car to charge the cellphones and her tablet, and we began collecting snow and water dribbling from the gutter downspouts to flush the toilets with. Other neighbors contrived tents indoors to conserve warmth, swapped information on what stores and gas stations were open. We did manage to walk the dogs every day, and to keep tabs on our nearest neighbors. What we couldn’t do was anything like work – since we are dependent on our computers for that – or stay up very much past sundown.

What we were able to pick up from neighbors and from the internet during those brief periods when we had power was infuriating. The various water pumps were supposed to have had gas-powered generators for back-up when the power goes out. The San Antonio Water System is taking some well-deserved lumps for that, as is the CEO of City Public Services, and Electric Reliability Council of Texas … especially as it has turned out that a third of the board members of that Council did not live in Texas, and at the last board meeting before the most recent emergency, spent less than a minute discussing the impending cold snap. (More here.) For myself and for many of the neighbors that we have talked to; this last week has killed the Green New Deal in Texas and any seductive notion of renewable energy sources – like the bird-killing and unsightly giant windmills, which froze up when needed the most and turn out to have only a fifteen-year useful life span. (The PTBs are doing their best to evade blaming the windmills for the outage, though. )The anger against the careless mismanagement of the Electric Reliability Council, and the tone-deaf initial responses by the CEO of CPS will not abate soon. This was an emergency predicted a week before it occurred, and when it did … our utility companies were caught with their shorts down. It will be quite a while before we forget the week of misery and cold, of melting snow to keep the toilets flushed and going to bed early to keep warm. 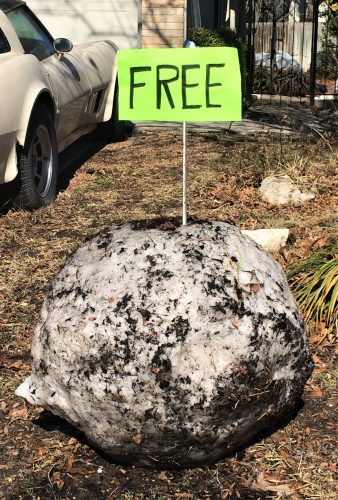