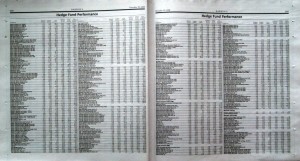 The hedge fund industry is coming under close scrutiny for a variety of reasons. In fact, it seems like that bad news doesn’t stop.

– Madoff runs a giant Ponzi scheme that claims up to $50 billion in losses. The exact amounts will be different because some of the “losses” represent paper profits on statements that he sent to customers that were phantom but assuredly they are large and painful
– Worse than this scheme was the fact that so many “fund of funds” or hedge funds that are comprised of investments in other hedge funds charged a big fee for the right to invest in this fund in the first place. Gulp
– Many funds that claimed they were “hedged” against market moves (where the “hedge” in hedge funds comes from) most assuredly were not; large losses of 40% or more are common in the listings, and some very big names have been seriously bruised

More subtle than these obvious issues are the fact that these hedge funds often have “high water” provisions. Funds typically make money by charging an annual fee of 2% a year and 20% of profits. However, if the fund declines in value, the hedge fund can’t charge the 20% fee on profits until after the old “high water” mark in value is reached. Thus if your fund was down 25% this year, you have to gain 33% before you can start earning your 20% cut again. On top of the “high water” issue, if your asset base drops 40% (remember those losses, above) then you are only making 2% on 60% of your former assets.

Another element is that banks aren’t going to lend as often or as frequently to hedge funds. Much of the gains that hedge funds claimed to make above the market are due to leverage. For example, if you put $1M in the stock market, and it goes up 20%, you have $1.2M. On the other hand, if you put $1M in the stock market, and borrow another $1M (at a low interest rate like 5% which the hedge funds probably used to get), then your $1M has a gain of $400k less the 5% interest which is a total of $350k. Thus your investment went up 35%, not 20%, due to the advantage of leverage. Some academics say that the entire hedge fund “premium” (or “alpha”, as they call it) is due to leverage and you or your endowment could accomplish the same thing with debt all by yourself (without the 20% cut of profits).

With the “high water mark” issues, the fact that 2% of assets doesn’t go far when your asset base has declined 40% due to losses, and the fact that banks and other entities aren’t loaning out cash cheap to hedge funds anymore, the whole industry is facing a bleak future. Some commenters are expecting 1/2 the total hedge funds out there today to fold.

I was struck when I read today’s Barrons’ and you could see the performance statistics and strategies for pages and pages of individual hedge funds in tiny type. The hedge funds used to highly value their privacy (some, like Madoff, for obvious reasons) and this clearly isn’t the case anymore.

One argument in favor of the 20% “cut” of profits (I don’t begrudge them the asset fee) is that their strategies were proprietary and hard to pull off. But when I look at these pages and pages of hedge funds, often with very similar performance under each strategy (and most of the strategies relatively understandable), I don’t see that at all. Obviously it can’t be so hard to do strategy “X” because there are many other funds doing the same thing, getting roughly the same results.

These strategies could likely be pulled off, if they were desired, by in-house staff at large institutions or endowments or within large brokerages like Fidelity or Schwab with a much lower premium than 20%. Then individual investors could purchase shares in those if they desired to participate in the strategies.

Watch for the final indiginity; lots of these hedge funds will close up shop because they don’t want to work for years without their 20% cut trying to recapture the investor losses, and then they will spring back to life with a clean slate and start earning the 20% on NEW investor money. Maybe the investors will demand tougher conditions (10% of profits) or actual “claw back” provisions where they can pull back money earned from the fund if losses occur later. Or maybe they will hire a few of their people and do it themselves, probably for closer to the 2% management fee than the 2% plus 20% model.