Okay, I am not making this up. PETA (People for the Ethical Treatment of Animals) has started an online petition to somehow change the name of  “fish” to “Sea Kitten”.

This is their reasoning:

People don’t seem to like fish. They’re slithery and slimy, and they have eyes on either side of their pointy little heads—which is weird, to say the least. Plus, the small ones nibble at your feet when you’re swimming, and the big ones—well, the big ones will bite your face off if Jaws is anything to go by.

Of course, if you look at it another way, what all this really means is that fish need to fire their PR guy—stat. Whoever was in charge of creating a positive image for fish needs to go right back to working on the Britney Spears account and leave our scaly little friends alone. You’ve done enough damage, buddy. We’ve got it from here. And we’re going to start by retiring the old name for good. When your name can also be used as a verb that means driving a hook through your head, it’s time for a serious image makeover. And who could possibly want to put a hook through a sea kitten?

The fatal flaw in PETA’s reasoning is that even if you call it a “Sea Kitten” the creature will still be slithery, slimy, cold, have eyes on the side of its head and in general have no mammalian empathic features. Humans won’t have positive feelings about the creatures no matter what you call them.

This little stunt exemplifies a concept common to the Left. Leftists nearly universally believe that you can change the reality of a situation by changing the words associated with that situation. Now, anyone who has done or seen marketing knows that you can slightly alter people’s perceptions of a situation (or product) by altering people’s associations with the situation. This is especially true in the case of non-functional products such as fashion items.  However, the tactic has very sharp limitations. You can sell perfume by associating it with a glamorous actress but you can’t sell antibiotics or machine tools that way.

Words do not control our thoughts. Indeed, words are little more than labels we attach to boxes in our mind that hold collections of pieces of information that together create a concept. The labels on the boxes change from language to language and with the same language over time but the central concepts remain the same. Changing the label on a negative concept does not alter how people feel about the concept. Instead, one must alter the concept itself.

My favorite example of this comes from scientific history of the study of the mind. Prior to the mid-1800s people that we would today call “mentally challenged” were termed “touched” as in “touched by God”. Scientists and doctors decided that such language was unscientific, disrespectful to the afflicted and prevented people from seeing the afflicted as having a disease. To remedy this situation, they changed the labels to “idiot” for adults having mental capacity of a three-year old and used “moron” to describe an adult with the mental capacity of a child aged 6-12.

“Moron” and “idiot” were strictly technical terms, so much so that they showed up in the laws of the time.

Of course, it did not take long for the words “idiot” and “moron” to become insults as people associated the words with the negative state of having a reduced intellect. People would exclaim, “What are you, a moron?” when someone did something stupid.

Now children on the playground mock each other as “challenged”.

Over a very short time, the reality of the condition described overwhelms any attempt to create a positive association by slapping a label with different associations on the box that holds the concept. Having an abnormally low intellect is undesirable and no amount of wordsmithing will change that fact.

Likewise, fish are not huggable. 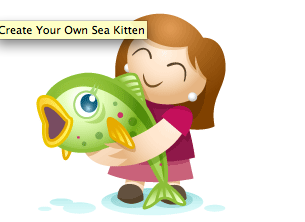 Slapping the name of something that is huggable on them will not change that fact. All it will do is change the connotations of the name. Should PETA succeed, decades down the road “kitten” will mean something cold and slimy.

One has a certain sympathy for those trying to make the world a better place for the “mentally challenged” but leftists choose to believe that changing labels changes the world because such a belief empowers articulate intellectuals. In a world in which words shape reality, those who control words control reality. Such a world view has a deep emotional appeal to the egocentric articulate intellectual.

So PETA’s effort is doomed. They can no more make people stop eating fish by calling them “kittens” than they could get people to eat kittens by calling them “land fish”*. Of course, helping fish isn’t their true goal. The well paid officers of the revenue-seeking corporation called PETA simply need something to attract attention and donations.

* As was suggested by the Cartoon Network’s Adult Swim bump where I found about this bit of silliness.