Today the crazed Illinois governor Blogo went on national TV to attempt to sway public opinion. We taped the various shows, and having watched Illinois politics for a lifetime, sat down and watched this totally amazing spree.

Geraldo ambushed the governor on the way to “The View” and actually let him off pretty easy. On his lawyer’s leaving:

It was like rats jumping off a sinking ship!

I would have to say no for the same reason his attorney Ed Genson pulled out of his case last Friday. He strikes me as someone who will not listen and who will just impulsively dive headlong into whatever crazy idea happens to come before him rather than try to approach this with some modicum of dignity 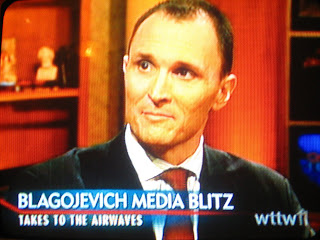 Then on Chicago Tonight they had an interview with Daniela Schreier who is a clinical psychologist who specializes in psychopaths. Here is a link to her profile. Here are her comments on whether or not he is truly a psychopath (she said he seemed to ACT like one, and looking into his blank eyes it seems like the truth):

He was also on with “The View”. When he said that he was interested in picking Oprah, Joy Behar said:

Oprah will just give you a car!

And then she tousled his hair and told him to put up his arms like Richard Nixon saying “I am not a crook.”

There were some actual journalists involved. Barbara Walters actually tried to ask him tough questions, and so did Diane Sawyer. But Blogo doesn’t even pretend to answer them, he just sticks “on message” with his rambling that 1) the trial is unfair because that he can’t call witnesses 2) the “fix is in” because he fought the state of Illinois.

From all of this he fails to point out that impeachment is a political process, and not a legal one. He doesn’t have the same rights as a governor as you’d have as a criminal defendant. He is not being charged by Republicans… he is being charged by everyone in Illinois.

This is an insane process and it is hard to imagine how even Saturday Night Live can improve on it. They probably will just play it straight.