On September 28th, David Foster posted about the Retrotech Event in New England, with the New England Wireless and Steam Museum firing up its steam engines for the public.

I mentioned that I attended a similar event on the West Coast a couple of weeks earlier.

He invited me to make a guest post on my visit.

On September 10th, I went with my car club to one of the most interesting places I’ve visited – in California’s Sonoma wine country.

One might say it was a journey back in time – to 1914 – to see a working lumber mill from that era. Even more mysterious, like the fictional Scottish town of Brigadoon, it only opens 4 weekends a year (versus once a century!). There was one visitor who made the trek of 550 miles from San Diego to Sebastopol just to see these machines.

It has been owned by the Sturgeon family all this time, and they are slowly restoring the steam-powered machinery to a working status.  They call their site a “working museum.”

What made this mill come alive was the work of dozens of docents – both knowledgeable in the lumbering business 100 years ago and the operation of the machinery. We witnessed large logs being converted to boards, all from this ancient machinery.

Sonoma county was very different in 1914. Today I believe, like adjoining Napa County, the predominate industry is winemaking and vineyards. But 100 years ago, wine was an infant industry.

These mills were designed to be moved when the local supply of trees was exhausted. The mill would be set up in a valley, with the trees in the hills harvested and transported to the mill down the hills.  There was no thought of replenishing them with saplings, as is common today.

When the supply of trees in the area dwindled, they moved the entire lumber mill.

And I had a quick realization. While lumbermen have always worked hard, imagine using a 6- or 7-foot 2 man saw 10-12 hours a day. We were also told of the redwoods only the coastal redwood was good for lumber. The giant Sequoias would tend to shatter when they hit the ground. Whether he was talking about Sonoma County in particular, or California in general, I should have asked. The giant Sequoias, as far as I know, grow only in a certain part of the Sierra Nevada mountains. Although a visit to nearby Muir Woods around Marin Country in the Bay Area will reveal some of our coastal redwoods.

Besides the main component, the actual sawmill had a series of engines under the floor.

The Williamette Yarder was a beast that was dragged through the forest and used via a series of cables to move the logs to wagons to take them to the sawmill.

“Long before the present-day tractors were developed, logs were moved from the woods to the mills, first with teams of horses or oxen, and then with the steam-powered donkeys and yarders such as this late 1800’s Willamette Iron Works yarder.

This steam-powered yarder was equipped with a system of cables which were hoisted up into nearby trees and fed through snatch blocks or pulleys and back to the yarder, forming a loop of cable. This cable was then used to pull the logs from the woods and load them onto wagons, trucks or train cars for the trip to the mill. One of the large pulleys sits in front of this yarder.”

Because just showing you pictures of these machines really doesn’t do them justice, I uploaded a few short videos to YouTube for you…

Under the Sawmill (A)

Under the Sawmill (B)

Getting Logs Ready for the Saw

Unknown Machine Name  But it looks like it was used to plane boards.

It was a fascinating few hours though a time portal over 100 years ago. 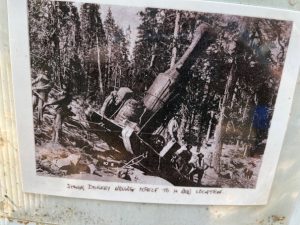 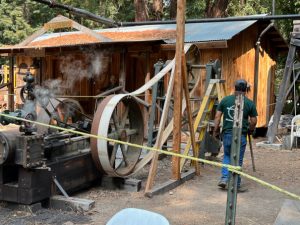 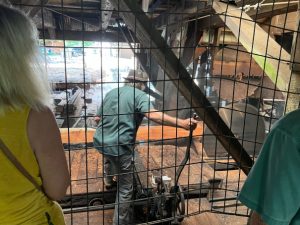