Three  Government Sponsored Enterprises (GSEs) stand at the heart of the financial meltdown: Freddie Mac, Fanny Mae and the Federal Home Loan Banks (FHLBanks). Like most people, I knew they were large organizations, but I had no idea how large until I read this article.

From a 2006 conference on the GSEs [PDF-Original,Local Archive] logical page 17: 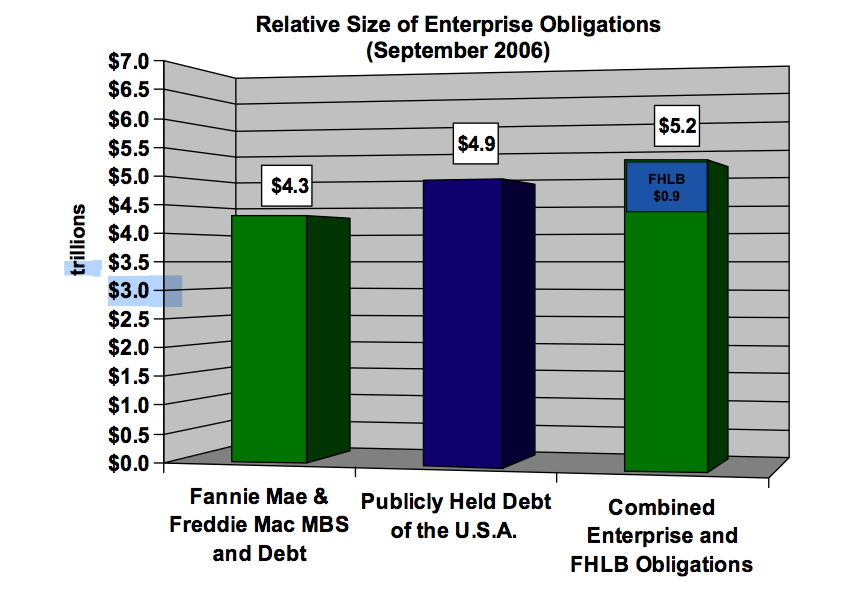 So we had these giant GSEs issuing mortgage-backed securities (MBSs) and generating a level of debt obligation bigger than that of the government that secured them. This was never going to end well.

I think it important to reiterate the following facts:

(1) The financial meltdown was caused by the systemic issuing of risky mortgages.

(2) The GSEs above were created with the sole intention of inducing lenders into making loans that the free market judged too risky.

(3) The GSEs operated in a custom regulatory environment much less strict than that of any private MBS issuer. In short, the critical lack of regulation occurred when the government, specifically the Democrats, refused to regulate their own creation.

(4) The GSEs were huge compared to any of the individual private issuers. No other single institution held more a few percent of the MBS market.

(5) Many, if not most, of the financial institutions currently failing are failing because the MBSs they bought from the GSEs proved worthless.

(6) Private MBS issuers got into the MBS business because the GSEs were making so much money at it. Had the GSEs never existed, the MBS market would never have reached such a colossal size.

The lesson to take from this failure is that if anti-free-market advocates had never tried to interfere with the free market in mortgages we would not be facing this economic collapse. The aggregation of risk assessment in the free market correctly judged that many people could not afford their mortgages. The GSEs were created to override this judgment and to use the attraction of safe, government-secured profits to lure lenders into making risky loans.

If you try to alter the course of a river against the flow of gravity, it will constantly seek to follow its original path. Diverting the river builds up a huge amount of potential energy behind the dikes used to alter the river’s course. Eventually, the river will burst through catastrophically and return to its original course.

This is what happened in the mortgage market. We tried to alter the market’s natural assessment of risk by using an artificial political mechanism to hide the risk. Over nearly 40 years, we built up a huge store of risky loans behind the GSE dikes until the risky loans burst through catastrophically.  Now the market is returning to its original and natural level of risk assessment, but we’re all going to pay for the raging torrent generated by the hubris of a few people.

5 thoughts on “Too Big and Failed”