Recently I had an opportunity to travel to Costa Rica. Being a rather boring blogger / analyst type, I thought a lot about the Costa Rica economy. 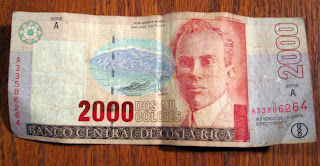 The Costa Rican dollar is known as the “colon“. Being the finance type, I went out to exchange money into local currency prior to entering the country. Most big local banks like JP Morgan didn’t have colones on hand – although they said that they could order the money and I’d have it in a few days – so they sent me to a specialized currency exchange. At this currency exchange there was a pretty wide “bid / ask” spread, or the difference at which they would purchase currency back from you against what they’d sell it to you for, indicating a rather thinly traded currency. I gave them 300 USD and received a big wad of Costa Rican currency – the common denomination I used was the 2,000 note which was a bit over 4 USD. This is a rate of about 500 colones to the dollar, or each one is worth about 2/10 of a cent.

From the Wikipedia article (I haven’t done much other primary research), there is a band for currency, and the colon trades at the low end of the band. However, I pretty much was able to use US dollars throughout Costa Rica, and everyone seemed to prefer the dollars (they always asked for dollars and seemed a bit disappointed when I pulled out colones, but I didn’t want to bring any back). Cash stations dispensed either dollars or colones.

It seems to make sense that Costa Rica ought to drop their local currency entirely and just move to the dollar – this would end the charade and limit inflation locally. I’m sure that there are many other considerations to this decision, including the independence of monetary policy and nationalist concerns, but it seems that de-facto “dollarization” has already occurred. If you are traveling to Costa Rica, I’d recommend having a few colones around, but would do most purchases in dollars or via credit card to avoid taking a loss on purchase and selling back remaining currencies. Local merchants and cab drivers would probably appreciate it, too. 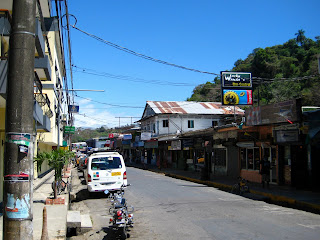 One item that didn’t seem to impact the local economy but annoyed me as an anal-retentive numbers guy is the fact that Costa Rica does not have a fixed address system. For example, if you wanted to send a letter to someone, you would reference the city and then say “500 meters east from the Coca-Cola bottling plant” and it would arrive. The cities were named (obviously) and landmarks were noted, but that was about it. In the guidebooks they mentioned that there aren’t street signs, and those municipalities frequented by westerners that tried to put up a few signs often had them up the wrong way because the workers had no context.

In the cities there were often lines of people queued up for the public pay phones. I spoke to one of our guides and he said that the land lines were a monopoly (no surprise there) but that the same phone company ALSO controlled the cellular company, so you couldn’t get a cell phone without a lot of effort. Needless to say this is going to saddle the country with a big productivity gap since the wireless carriers have been able to “leapfrog” the slow land-line companies and offer innovative services, especially to less wealthy customers (like text messaging and pay-as-you-go minutes). It seemed like many places (all resorts) had internet access, and many bars and restaurants of the types that would be accessed by Westerners had wi-fi services. I seemed to be able to get a signal on my AT&T phone but was refraining from making calls in fear of punitive local “roaming” charges. 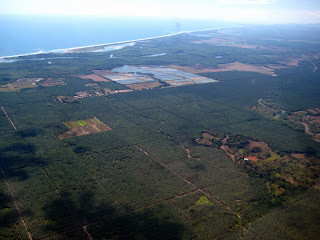 Agriculture seemed to be very effective in Costa Rica. Any plant that you’d struggle to grow in the States just popped right out of the ground in Costa Rica – for many plants (bananas, for instance), you can just put a certain type of branch from an existing plant into the ground and a new plant would sprout up and grow at a prodigious rate. In addition to the banana cash crop, coffee was a major export earner, and palm oil (such as the view below from a local airplane) plantations, as well.

I learned that apparently bananas are at risk of being extinct – there are no “seeds” since you just put an existing shoot into the ground – so when some sort of agricultural blight strikes the banana (in its current form), they will likely all die off. Apparently the Cavendish banana is the one we all eat today, and here is a Wikipedia article describing the situation. 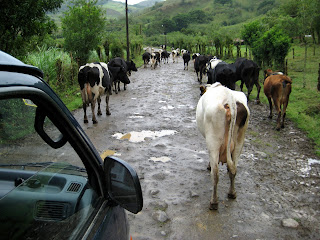 I am not an expert on ranching by any means but the cattle seemed very skinny in Costa Rica. A local said that they had programs encouraging the farmers to clear the land for grazing at one point but once the trees are gone the soil isn’t so great, and plots are small and often on steep ledges, meaning that the cattle have to expend a lot of energy to eat and thus grew slower, making ranching not very profitable to the rancher.

This photo also shows another endemic issue – poor quality roads. Outside of the main cities and parts of the Pacific, most of Costa Rica seemed to lack paved roads. I often was astounded to cover an abysmal road for a couple of miles that led to an absolutely top quality, brand-new resort. You’d think that the resort would invest a bit to pave the local road, too, but maybe it is because they often wash out anyways on the steep hills. From what I’ve heard the situation is getting a bit better over time, but this is an area that they could stand some more investment. At least the country is relatively small. 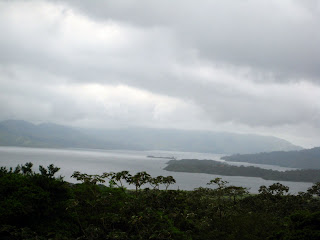 This photo is of Lake Arenal, a major dam built in the country. This dam provides a significant portion of the country’s electricity, allowing it to avoid dependency on outside fossil fuels and even to earn some money exporting electricity to neighboring countries. As I traveled throughout the country it appeared that almost all dwellings in towns along the road had power – it is safe to say that Costa Rica has their priorities in the right place when it comes to leveraging their natural assets (rivers) in order to improve the lives of their people, as opposed to the US where we refuse to take advantage of our hydroelectric potential anymore and are even considering blowing up dams in order to allow free fall of the various streams and rivers.

As I traveled in the country, I noted a large number of smaller-scale resorts. Various documents (I don’t have definitive proof) said that up to 80% of the coastline is in the hands of outside investors. For all this, the Costa Ricans seemed very friendly and not angry over foreigners purchasing property. If you think of it from their perspective, the foreign owners build the facility using local labor, staff it with local labor, and purchase food and alcoholic beverages locally. Without the foreign money, it is likely that many of the resorts wouldn’t have been built in the first place. Other than the “economic profit” of owning the resort, which would be the profit after all costs are deducted and the investment and construction costs are taken into account, all of the other outflows are received by Costa Rica families as noted above. The foreign owner has to make money after paying all costs plus covering investments, even while the Costa Rica currency continues its slide against the US dollar, which reduces the value of assets if you are predominantly dollar based.

Some of the resorts purchased adjacent land in the rain forest, for example, and left it in its natural state. This land was used for tours (usually with a local guide) and raised the value of their existing resorts. Some of our tours were thus on private lands, even though much of it was next to park lands allowing the animals more room to roam.

All in all, it seemed that they were doing a generally fine job of running their economy, relying on agriculture (which the country is fantastically suited for), being open to foreign investment and tourism, and leveraging their hydroelectric assets to provide electricity throughout the land without paying out currency to foreign suppliers. They might as well give up the ghost and just dollarize, and it would make sense to lift the telecom monopoly on mobile phones, but perhaps they will consider this in the future. Although it doesn’t seem to affect anything, they also ought to put in some sort of address system, just to ease my number-orientated mind.