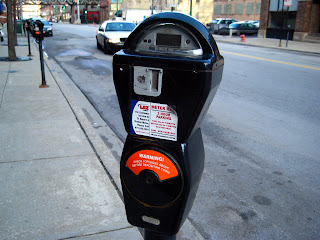 The City of Chicago, in order to close their yawning budget deficit without cutting any spending, resorted to a one-time sale of their parking meters to a third party.

Here is a link to a Chicago Tribune article about the lease. The City received $1.2 billion in cash, immediately, but forfeits the revenue from the meters for the term of the 75 year lease.

In practical terms, the meter rates have increased drastically. All week long they are basically $2 / hour, where ever there are meters (most side streets don’t have meters). From 8am to 9pm this would work out to $26 / day. You can see the rates on the meter. Note also the sign that you can’t put in money for more than 30 minutes at a time (on this particular meter) – probably that’s left over from its prior incarnation. I assume that there is some sort of credit card way to pay else you need to walk around with 100+ quarters (a roll?) just to pay for parking.

The company with the sticker on the meter is operating this deal – “Laz” – and Morgan Stanley set up a consortium to invest the money and capture the future revenue stream. From the “Laz” web site:

CHICAGO METERED PARKING LLC SELECTED AS PREFERRED BIDDER FOR THE CHICAGO METERED PARKING SYSTEM
December 04, 2008–CHICAGO
HARTFORD, CT – December 2, 2008 – LAZ Parking, LLC is pleased to announce that a consortium led by Morgan Stanley’s infrastructure investment group has been selected by the City of Chicago as the preferred bidder for the 75-year concession of the Chicago Metered Parking System. LAZ Parking, headquartered in Hartford, will be responsible for the operation of the system.
The Metered Parking System has up to 45,000 parking meters, together with surface parking lots, throughout downtown Chicago. The City retains all power and authority to set rates and periods of stay and operation for all of the parking meters in the System. The acquisition of the concession is subject to the approval of the Chicago City Council and the Board of Commissioners of the Park District and financial close is expected to occur in the first quarter of 2009.

For me personally what is going to stink is that parking used to be free on Sundays, when Dan and often my father or Gerry would drive over and park near my house and then we’d all drive down to Soldier Field together. Now that type of day would end up being pretty expensive, although I don’t know if you could even feed the meter that much in advance (wouldn’t the meter be so full of quarters it would explode?).

I also don’t know what the valets are going to do – they usually block up all the spots in advance and then when they are pulling out a car a different valet moves into that same spot (so you can never park at night). This will all probably happen around 9pm when the $2/hr rate expires – before then, likely valet parking will have to cost much more because the valet is out $2 / hr and they need to make money on top of that.

The City also sold the Skyway toll road to a foreign consortium – and they held some of the proceeds in a “rainy day” fund (which gives comfort to bond rating agencies) rather than splurge it all immediately, so hopefully they will follow that precedent with this deal.

Bad news for us Bears fans, though…