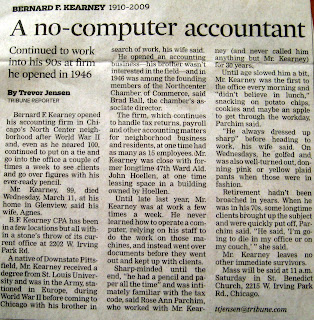 Over the years industries change, and are impacted by technology. The famous examples are robots replacing workers on the assembly lines, automated phone systems eliminating the need for manual operators, and the impact of the web on a whole host of systems from journalism to retailing.

One item that has received relatively little attention is the impact of computers on the accounting profession. This article describes the death of a sole practitioner who ran a small firm and was able to do this without utilizing a computer – the rarity of this situation led to the above headline.

When I was interviewing much accounting work was done by hand. Computers were used, but they were mainframes, and they basically held the journal entries that were calculated and supported off line. Accountants had many manual worksheets (21 column paper) where you put down your numbers (by hand), “tied them out” to source documents, and made your calculations. The advent of Lotus 1-2-3 which was ousted by Microsoft Excel and other similar programs eventually automated all of the analysis and workpapers supporting the audit.

For annual reports, they were typed by hand (for smaller companies or pension plans), or sent to an expensive printer for production. Word processors were new and dedicated and difficult to use – we had a print shop full of women (at that time, they were all women) who would take the manual documents and physically type them up and then you’d proof them and send back changes. Obviously this has been passed by with a whole series of programs that allow for this to be done and checked without clerical staff.

For taxes, forms were done by hand. The earliest programs were used for the corporate returns and complex calculations such as depreciation; I remember thinking that there was no way that a computer would be able to automate all the complexities of the tax code. And while the corporate world still is extremely complex, much of the individual tax world can be done with off the shelf programs that allow tax preparers to bring up the prior year return and do them quickly and efficiently, as well as check calculations and for missed deductions.

The interesting thing is that while automation has drastically changed the job of the accountant, eliminating much of the word processing, manual calculations, and forms, the number of accountants has only increased. This is probably due to the fact that computers have allowed the government to come up with more complex requirements for financial statements, and Sarbanes requires myriad more processes to be fully documented. Meanwhile, the tax code has become infinitely more complex, with new laws and regulations coming in a flood.

It seems that Moore’s law, the increasing power of technology, has been trumped by the increasingly byzantine power of bureacracy and our elected officials to add complexity. I don’t have a name as catchy as “Moore’s Law” for this trend, however… but am open for ideas.

10 thoughts on “Computers and Accounting”