A lot of people arguing against my thesis that the government-sponsored enterprises (GSEs) lie at the heart of the residential mortgage problem ask the obvious question: If the GSEs cause problems, why are we only seeing a problem now? Why didn’t we see problems a long time ago?

Try this analogy on for size: It has been snowing on the mountain for years, yet we’ve never had an avalanche. It must be caused by something else. Carl’s yodeling must have angered the mountain spirits.

Look at this graph from Ginnie Mae itself of the buildup of the value of mortgages guaranteed by Ginnie Mae. (Ginnie Mae is a behind-the-scenes GSE that is explicitly backed by the full faith and credit of the U.S. government.) 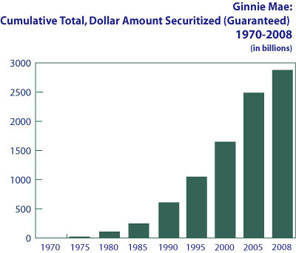 I can’t find the graph of the similar growth of Freddie Mac, Fanny Mae and the Federal Home Lone Banks (Flubs) but they were linked to the growth of Ginnie Mac as Ginnie Mac secured most of the mortgages the GSEs bought up. Obviously, given their huge size, they too started out small and grew gargantuan over a period of decades until their combined debt exceeded that of the federal government.

Had the GSEs failed anytime prior to the mid-’90s they wouldn’t have caused much damage, due to their small size relative to the entire market. Institutions could legally hold their debt instruments, securities and stock as legal collateral just as they could have legally held T-bills. Yet in the first two decades of their existence, few private institutions held enough GSE debt to cause major problems if the GSEs tanked.

By 2000, however, the gradual accumulation of GSE debt in private hands began to reach dangerous levels. By 2008, it was very serious. Worse, the market viewed that debt as being as safe as T-bills. This induced private entities to take greater risk with private investments. Most notably, it induced credit-default-swap issuers to use GSE securities and bonds as major parts of one side of the swap in a lot of swaps.

So, when the GSEs tanked in 2008, they took a lot private parties down with them. People didn’t have to play fast and loose with novel finances, they just had to trust the integrity of the GSEs. Institutions like arch-leftist Maxine Waters’ pet bank became insolvent merely because they had bought GSE stock to use as collateral. Many banks sold mortgages to the GSE and then bought GSE securities back as a means of insuring against a local real estate bust.

Even if we had imposed the regulation that Democrats now claim they wanted back circa 2000, the growing size of the GSEs would have eventually led to problems. How long could the economy have tolerated treating a debt backed by residential real estate as presenting the same risk as T-bills? If the debt of the GSEs had grown twice as large a the federal debt, even a relatively minor nationwide real-estate bust would have had cataclysmic consequences. All the institutions that bought GSE debt to use as collateral would turn insolvent overnight. This would cut off lending, which would have driven the real estate market down more, creating a positive feedback loop. We would be seeing the same problem we see today but on a larger scale.

When we started distorting the market, we began to build an avalanche of lies about the risk of residential mortgage lending. Like villagers in the Alps living under a growing snow mass on the mountains above, we were going to have an avalanche at some point.

[Update: I would also add that the GSE issued debt based on 15-30-year residential mortgages. Such debt instruments have to hang around for a long time before their benefits and risk become apparent. By the late ’90s, GSEs had been around for 20 years, so people began to trust them at greater and greater levels. Worse, they made the whole MBS concept seem safe so more and more private entities started issuing them.]

22 thoughts on “Why Did the GSEs Cause Problems Only Now?”