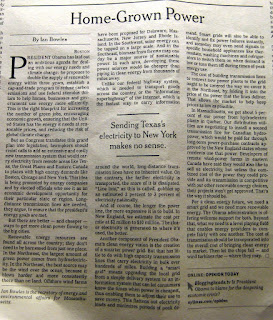 The energy industry in the US is complicated and when I write posts I like to provide a decent amount of background for my thesis that we are allowing our energy infrastructure to deteriorate and not doing anything constructive about the situation. One critical element of this is that the greens and left-leaning individuals, who decry “old school” solutions like building new coal plants and promote complicated and unproven alternatives to these known, sensible and cost-effective solutions – are being disingenuous when they counter propose their “solutions”, because in the end they don’t want to do anything constructive at all to re mediate and solve the issues. This opinion article, in the New York Times, neatly encapsulates their duplicity by clearly stating that they don’t WANT to solve the transmission problem, even if someone could wind their way through the rats nest of financing, legal issues, and permitting. Thus it represents an important piece of evidence as a “confession” of their duplicity.

The energy infrastructure of the United States consists of three main components:

– Generation (nuclear, coal, gas, hydro, and other)
– Transmission (the lines that connect power stations to cities, and the utilities to each other)
– Distribution (the local electric lines, customer meter, trucks, etc…)

In general, the US has failed to invest in generation and transmission assets over the last 25 years or so. “Base load” generation primarily consists of 1) coal plants (no one is building new ones because of environmental legislation) 2) hydroelectric plants (no one is damming rivers due to the Sierra Club) 3) nuclear plant (they are far too expensive, regulation is uncertain, and Three Mile Island hasn’t gone away). There have been some “peaker” plants running natural gas (more expensive) and some minor “renewable” projects but generally we have just been “running in place” with regards to capacity and utilizing up all the “reserve” capacity that had been built up in previous years, as evidenced by blackouts in places like California.

Transmission consists of the long high voltage lines that crisscross the country. While some of these lines have been rebuilt and capacity upgraded, generally we have NOT built new transmission lines. Transmission lines that cross the country or long distances require permitting and siting and can take decades to build, if you can stomach the endless rounds of negotiating with all parties along the way and an ever changing morass of regulatory issues. Even after a line is permitted and built, the courts can stop them from functioning, such as a famous undersea transmission cable in the East that cost hundreds of millions to build.

Distribution is the third major leg, and there has been some investment in distribution, smart metering, etc… This investment is easier to make because it doesn’t have to run the same “thicket” of environmental and legal regulations and is more in the control of the local utility, which is also tied in with local governments. Improvements in distribution have bought us time and allowed us to get by with the generation and transmission grid we have, but it isn’t a panacea to our overall problems. Generally if there is going to be conservation it comes out of the distribution area because this is where the “demand management” programs reside which attempt to adjust consumer behavior and incent either lower electricity usage overall or, more importantly, less energy usage on peak.

After improvements in distribution have reached the point that incremental investment only yields marginal returns, the next place that the government will look is transmission. Our transmission grid today really represents the “best guess” of population centers and generation locations as of the 60’s and 70’s… almost 40-50 years ago – because almost no new lines of any significant substance have been laid down since that time. Thus while it functions reasonably well, if you could target investment you could likely leverage generation assets much better, including linking to areas where renewable power could be located (i.e. windy areas in the great planes, offshore wind farms, deserts where solar panels could be located, etc…).

Like the big false hoopla over nuclear power plant (which I demolish here), there has been big talk of our new appetite for investing in bona-fide new transmission assets. Like nuclear power, this one is NOT going to happen, and here’s why.

1) any route has to be circuitous and planned almost decades in advance – here is a blog post I wrote about a fight for a transmission line in the West and you can see its circuitous (i.e. VERY expensive) route, which costs > $1M / mile

2) while the greens claim to be rational and open to solutions, in fact they are against EVERYTHING. This article, listed above, is indicative of their “true” feelings

This article is an editorial in the New York Times basically staking out their conceptual opposition to transmission lines, that they don’t want power from other states coming to New York. They are glossing over the source of the power, but if anyone was actually going to DO something about our power situation, they would support some sort of generation increase and then support some sort of investment in a transmission grid to get that power where it is needed, which is cities like New York.

This article lays out bare that they DON’T really support any kind of constructive solution to the situation, they just want to push on demand which in turn ultimately is going to drive any kind of manufacturing or energy intensive activity out of the state, because rates will have to rise to discourage use. They really feel that we shouldn’t invest in energy because it is “bad” to do so, and that if we just reduced our energy footprint to zero, the world would be a better place.

On top of all the above problems (that the greens and left will sabotage any constructive solution to the situation), there is the fact that EVEN IF all the forces lined up for going forward with transmission investment (or generation, for that matter), financing is very difficult right now, and the utilities have little incentive to stretch and fund something that the states could invalidate even after giving you all the permits to go forward. Remember, out east, they dismantled a completely constructed nuclear plant on Long Island (Shoreham), pretty much bankrupting the Long Island utility company in the process. Needless to say, you don’t get something like that built without permits, but in the end they play so dirty with politics and lawyers they won and had it disassembled.

Lenders would have to have a lot of cash laying around and have no grasp of history to fund these types of investments, for generation or transmission, in the East.

Thus, no solutions on the horizon, and all of the current administration and legislatures’ positioning on the issue is just hot air, useless. Their actual platform is:

– do nothing about generation
– do nothing about transmission
– invest a little bit in distribution
– talk a lot about conservation
– dance for a few years, let the problem get much worse, and hand it to the next administration, or really to the states, since the Federal government can’t FIX the problems, but they can make them worse (thru legislation)

Very soon you will hear the current administration speak much less of energy, since they don’t offer any concrete solutions, and the problems have a longer time horizon than their campaign rhetoric.