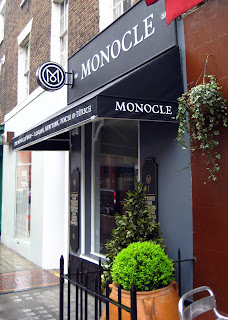 The masthead of our blog at Life in the Great Midwest used to say that we “shill for no one” and it is true, no one that pays us, at least. But Dan and I are big fans of the magazine “Monocle“. Monocle covers obscure topics – the first magazine covered the modern Japanese navy (which is why I picked up the initial issue on the spot and wrote about it here). The magazine has beautiful pictures from expert photographers and covers topics like the Falklands, Iceland, and other interesting spots around the globe. Fashion and art are also frequent and well-written topics.

I heard that Monocle was going to open stores so I stopped and took a photo as I walked past this shop in London. Unfortunately it was closed at the time but I wish them the best in their stand-alone stores. Dan bought me a subscription to Monocle for xmas which was much appreciated. I send the issues on to my nephew at college when I am done – even if he doesn’t read them he will look cultured to whomever he brings back to his cinder-block dorm room. 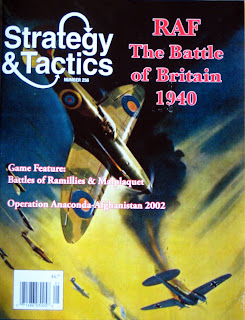 Another favorite of the blog is the magazine Strategy and Tactics. This magazine covers military topics from the ancient world to WW2 to today. Every year when I renew my subscription I also buy one for Dan and now Gerry, as well (he might be wondering why that shows up in his mailbox every month). The magazine came from the era of physical (not PC) war games and they used to put a game in every issue – but now most of the magazine focuses on relevant articles.

I particularly like the “for your information” column where individuals write pithy articles of 2000 words or less on topics that I, at least, find fascinating. Here are some highlights from the latest issue:

– the statistic that 2008 was the first year that the US air force added more pilot less drones to the armory than manned aircraft
– an article about how the Israeli army used armored bulldozers to level enemy strong points in their wars in Gaza
– A very good article on Gerald Bull, the artillery genius who designed a long range 155mm cannon and worked on a gun large enough to launch satellites into orbit – he was assassinated (likely by the Mossad) as he worked on a project for Saddam
– an article about the survival of the battle cruiser Seydlitz, which barely escaped sinking after Jutland in 1916

It helps that I already know a lot about these topics, I guess (I added the part about Bull and the Mossad from my general knowledge – I think when he was shot he had tens of thousands of dollars on him that was untouched, which you’d figure an average assassin would have taken).

If you have some time I’d check out both of these interesting magazines. If anyone has shopped at the Monocle store, pop in a comment.

7 thoughts on “Monocle and Strategy & Tactics”