Flying has lost much of its glamor. The flights I have been on recently are invariably packed to the gills, late, and generally unpleasant.

International travel, on the other hand, is thought of as more upscale. First class or business class has some amenities, and there are clubs to get a free drink and relax.

Leaving Chicago you may go through the international terminal. Although I have flown outside of the country before out of Chicago, it has been on US based airlines like American and United which fly out of the regular terminals.

I was astounded by how crappy the International O’Hare terminal is. Going in, there are a few fast food restaurants, a gift shop, and that’s about it. If you go through security, all you can buy is a double vodka and a newspaper – there isn’t even FOOD! We backed up and waited in the lobby before the security gate and at least sat in a fast food court which, relatively speaking, was the lap of luxury.

While the building itself is relatively new and fancy looking, the building is not very well designed for its current purpose. I would have taken a picture but didn’t want to get thrown in the clink, and not much to see, anyways. 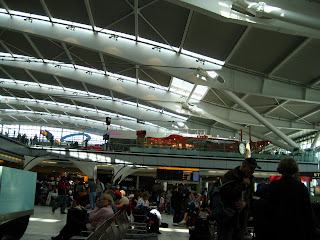 Certainly the facility is much nicer than the Chicago Terminal #5, as you can see in this photo. The shops are upscale and you can probably buy about anything under the sun, from clothes to mementos to getting an upscale meal. 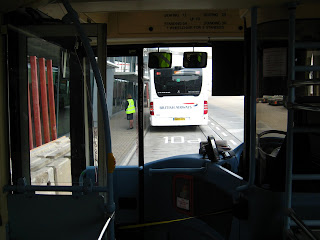 And yet, in the most IMPORTANT element of a terminal, getting you on and off your plane, Heathrow Terminal #5 fails the grade.

When we arrived in London, after a long flight and landed, we sat on the ground for half an hour waiting FOR A BUS. Yes, a bus. Apparently, after spending billions and billions of dollars on a terminal, no one put much effort into the key function of the terminal, which is connecting planes to people. Here is an article from the UK explaining the bus situation, where British Airway says 20% of the flights will involve bus connections but that other writers say could be up to 50% of the flights.

Not only do you have to ride the bus, you need to walk up or down the stairs to get onto the bus. If you are old or infirm, you need to walk down a long flight of stairs, with your carry-on luggage, in order to get onto the bus, in the first place. Luckily it was a relatively nice day, or it would be cold and windy going down the long flight of stairs (there is a cover over the ramp, but it would be unpleasant).

When you get onto the bus, it is packed, and pretty much everyone is standing, to boot, which would make it even less fun for the elderly. It wasn’t fun for the fit or able, and this isn’t a short ride, either – it seemed to be about 10 minutes or so once the bus was loaded, full, and on the way.

Thus, in a race to the bottom, the crappy Chicago O’Hare terminal, with about 2 shops and nothing but booze beyond security, actually beats the heck out of the brand new, multi-billion dollar terminal in London, which doesn’t even meet the basic test of CONNECTING YOUR FLIGHT TO THE BUILDING.

11 thoughts on “International Terminals – Race to the Bottom”