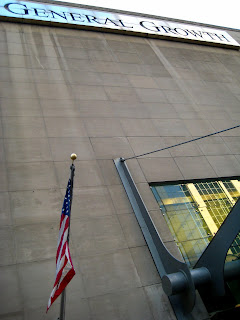 As I walk to work in the morning I pass right by the headquarters of General Growth. General Growth is a corporation that owns over 200 shopping malls throughout the United States, along with other commercial properties. General Growth recently declared bankruptcy, stating that this filing will not impact operations at its properties. From their press release:

The decision to pursue reorganization under chapter 11 came after extensive efforts to refinance or extend maturing debt outside of chapter 11. Over many months, the Company has endeavored to negotiate with its unsecured and secured creditors to obtain the time needed to develop a long-term solution to the credit crisis facing the Company. Unable to reach an out-of-court consensus, the Company reluctantly concluded that restructuring under the protection of the bankruptcy court was necessary. During the chapter 11 cases, the Company will continue to explore strategic alternatives and search the markets for available sources of capital. The Company intends to pursue a plan of reorganization that extends mortgage maturities and reduces its corporate debt and overall leverage. This will establish a sustainable, long-term capital structure for the Company.

The downfall of the commercial property industry, however, is the fact that many of the loans need to be “rolled over” every few years. On your home, for instance, you may have a 30 year mortgage. The debt on the commercial property industry, on the other hand, rolls over usually within 5 years. Given that a typical company has many projects, in the next 12-18 months many of these sorts of companies are finding loans coming due and they have no way to raise the money (except at punitively high interest rates, if they can find money at all), so they are all starting to go bankrupt and fall like dominoes. It doesn’t help that many of these enterprises bought properties in the go-go years of 2005-8, when prices were rising all the time and there were bidding wars – it is likely most / all of those properties today are worth less than they were purchased for which makes obtaining new financing even more difficult (try to refinance your home loan for more than the current market value of your home… it isn’t happening).

The Chicago Tribune had an article in today’s paper titled “Little Room to Operate – High debt load, declining revenue for hotels could bring glut of loan defaults“. This article discusses hotel construction efforts that are likely to stay half-completed (see my post on this months ago, from November, along with links to a video of Thailand)and the fact that many completed buildings are likely to be seized by lenders.

While I knew that many of these commercial properties and hotels were purchased with lots of debt and very little sweat equity, even I was surprised by this quote from the article:

An entire industry was built on optimistic assumptions on revenues, expectations of instant access to credit, along with low interest rates – and now that industry is going to be in for an immensely painful crackdown.

Once whatever is built is completed, don’t expect anything new and significant to come on line for many years to come, and those projects that do come will be built to meet known demand with well funded developers, not fly-by-night guys building on “spec” with a dream business plan.

As someone looking at a skyline, at least once it is built I am indifferent if the original builder loses his (tiny) equity stake and even if the bank gets hit with a big loss on the loan. I just don’t want to look at a half completed building for the next decade. Once built, the building will be occupied, unless the cost of operations is greater than tenant income, which seems unlikely. Given the high up front costs of construction and debt in this industry, once those are removed (i.e. everyone goes bankrupt and the loan is sold at a loss) an office building should be able to generate positive cash flow.

These new buildings, especially if they come through bankruptcy with a light debt load, will in turn put immense pressure on existing, non-bankrupt commercial retailers. After all – would you rather stay in an older building at or near market rates when you can move into a brand new building that is offering you a discount (because any tenant is better than no tenant)? The older lower quality buildings will soon be in competition with the new buildings and will have to slash prices or lose tenants, which will impact THEIR ability to roll over their financing.

All I know is that the commercial real estate shake out is far from over and I would expect virtually all of the heavily leveraged players to fall into bankruptcy and then many of the other players who still have pretty high debt load to fall onto hard times as they compete with the buildings that have cleared bankruptcy and have new investors. Given the fact that bankruptcy doesn’t “shutter” the competitor (just the company behind the operations), these markets are going to look a lot like the airlines, where the bankrupt companies just don’t go away and keep dragging down their healthier competitors. The prices are going to go down and down, and it won’t fix itself for many years until demand picks up again. Don’t count on many of today’s players to make it to that point, though.