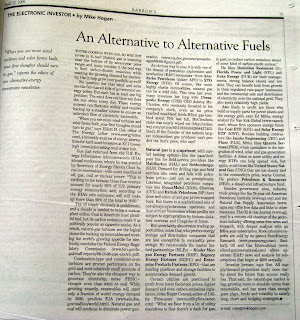 In the April 27, 2009 issue of Barron’s magazine is an article titled “An Alternative to Alternative Fuels” by Mike Hogan. Barron’s is an offshoot of the WSJ and generally offers pithy and to-the-point articles, although sometimes even they go off the reservation.

The byline in italics does a pretty good job of summing up the REALITY (not the fiction, by both Democrats and Republicans) of our energy policy:

When you see more wind turbines and solar farms built, your first thoughts should turn to gas

Doesn’t that sound counter-intuitive? But the article does a decent job of explaining why.

Gue just returned form the US Energy Information Administration’s (EIA) annual conference, where he was puzzled by Secretary of Energy Steven Chu’s focus on renewables – with scant mention of oil, gas, coal or nuclear power: “This is striking to me because these four sources account for nearly 93% of U.S. primary energy consumption: and, according to the EIA’s own estimates, will still make up more than 90% of the total in 2030.”

Chu is the presidents’ new golden boy who is supposed to take the US energy policy into the new direction of alternative energy, even though as a scientist in charge of actual facts he must know that this is nothing more than window dressing, since renewables face a host of difficulties (they are unreliable, there is no transmission, and they are heavily dependent on subsidies).

As the article notes, oil, nuclear and coal are essentially pariahs. Don’t believe the Republicans touting 100 new nuclear reactors – we might get 2-3, if all the cards fall just right. They likely cost $10 billion EACH, with power company balance sheets shriveled and no incentives, there isn’t $1 trillion dollars ($10 billion * 100 reactors) just laying around for them to toy with.

As the article notes, then the only viable alternative for an actual, functioning economy is natural gas. Why? Because you can site a natural gas plant pretty much anywhere, they are cheap to construct, and are viewed as environmentally benign. This has been our de-facto energy policy essentially since the early 80’s anyways – if you need generation, don’t bother trying to build coal, nuclear, hydro or new transmission lines – just site a natural gas “peaker” plant near the demand and call it a day.

The PROBLEM with natural gas is that it is the most EXPENSIVE to run of all the items listed above. The plant is relatively cheap to construct and run (fixed costs), but the marginal cost of natural gas is much higher than the marginal costs of the other plants. If you really ran a peaker plant all the time, the cost will go up very quickly in most typical natural gas markets.

The price of natural gas is a roller-coaster. When I was in the industry in the 90’s $2 / unit was a good price. There was some seasonality in the price – it would spike up during the winter months and also in the peak months of summer – and the price would go down as utilities re-filled their storage capacity in the “shoulder months” of spring and fall.

Nowadays natural gas prices spike wildly; they were recently near $14 / unit before they have fallen down below $4 / unit. At $14 / unit, your local natural gas peaker plant is a horrible blot on your electrical bill – at $4 / unit, probably not so much. In fact, if there was stability at around $4 / unit, that would be a good price for the industry.

Natural gas is essentially a local US and Canada market. We did add some LNG terminals that allow us to bring in foreign gas to the US – this is a good thing. The natural gas, however, competes with gas used for heating and is tied to our fickle environmental policies and tax policies which change by administration – for instance much of the best drilling area for natural gas is currently off limits and tax breaks for drilling (and other incentives) are at risk, while the prior administration was all for it.

The environmental debates are hype. Here are facts:

– Almost no new nuclear plants will be built – maybe 2 to 3 (optimistic) which won’t even dent what is coming out of service
– Almost no new coal plants will be built – also not enough to keep up with old ones coming off service
– Since most of the renewables are low power in terms of MW and not sited where there are transmission lines, they won’t make much of a dent in anything
– We don’t have the will or the money to fix the transmission grid, that isn’t going forward
– There likely will be some savings on the distribution (customer) side from more efficiency and perhaps smart meter benefits – these will reduce the rate of growth in usage
– Businesses don’t rely on the grid if they need un-interruptible power – they will just keep on buying and installing backup generators, at a higher total cost than just building reliable baseload generation (making us less competitive overall, and frankly a bit third-worldish)
– Whatever gets built will be natural gas, and then our overall price (market rate) for power will essentially be set by the highest cost “peaker” units, which will be natural gas. Thus if prices stay low, we are OK, but if they rise, expect chaos in the markets

I wouldn’t call that an “energy policy”, since it essentially means let our base load units rot and make our policy dependent on the wildly fluctuating spot market for natural gas, but, there it is.

And don’t believe the hype, from anyone.