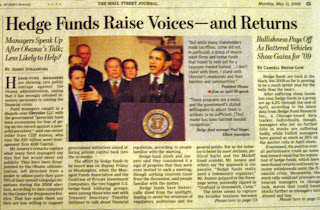 A recent article in the Wall Street Journal was titled “Hedge Funds Raise Voices – And Returns”. Hedge fund managers are supposed to be professionals at managing risks and seeing future trends – this is what allows them to be compensated at such high levels. Thus this article made me laugh out loud:

Many fund managers say they feel… but would never say publicly: They have been disappointed by the Obama administration, left detached from a leader to whose party they gave 70% of their overall campaign donations during the 2008 election.

What sort of information were they basing their opinion that siding with Obama was GOOD for their interests? Obama always has sided far to the left on business issues, favoring unions, high taxes, and restrictive environmental rules that damage businesses. How could these “sages” of risk and reward think that he possibly could help them?

Most likely they are wealthy people and live amongst the trust-fund wealthy and they felt it was easier to say that they supported Obama than the Republicans because of W’s unpopularity. Or perhaps their new 2nd trophy wife, the one they picked up after they cast aside the one that stood by them while they were working their way up the ladder and didn’t have giant riches, pushed them into it because it seemed like all the celebrities said it was the thing to do.

Either way, it is laughable and nearly insane that 1) they donated to a guy whose interests were diametrically opposed to theirs 2) that they were SURPRISED by this outcome 3) and that they are supposedly forward-looking guys, to boot.

9 thoughts on “And These Guys Assess Risk… for a Living?”