Last Friday night I was walking through the Gold Coast near Hugo’s Frog Bar when I noticed a large black SUV with congressional license plates so I snapped a photo. 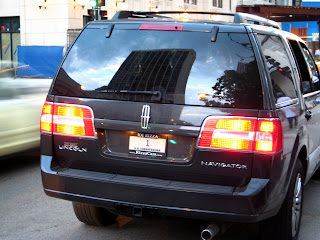 I wasn’t sure which of our illustrious Illinois congressmen this was – I assumed it was our local Danny Davis (who doesn’t even pretend to represent the prosperous downtown, as I note here) – but in fact I did some digging on the internet and according to this post it is Jesse Jackson Jr. who is leasing a Lincoln Navigator at taxpayer’s expense at over $1100 / month (a new one retails for over $50,000).

I wonder what Jesse Jackson Jr. was doing up here? Based on a link to his 2nd congressional district map he is FAR from his hometown – he should be hanging out in Harvey or in nearby Calumet City (home of the Blues Brothers) if he really wants to go out for a good time. Why would he want to venture so far from his constituents? According to a simple google map he is about 25 miles out of his district on a Friday night.

Isn’t it amazing – the hypocrisy – of a “stone” democrat like Jesse Jackson Jr. driving a giant, gas-guzzling, environmentally destroying SUV like a Lincoln Navigator? Shouldn’t he paint it white so it at least reflects sunlight like a “green” roof, at the very least? Why isn’t he driving a Prius or something like that, or perhaps is it because he believes that conserving energy and leaving a smaller carbon footprint is for those that he taxes, not himself?

I won’t even pick on Mr. Jackson Jr. for his “alleged” attempt to raise money for Blago for a senate seat… we know that he is above suspicion, of course, since he is obviously a man who sticks to his principles.

11 thoughts on “Living Large as a Representative”