Let’s run a small thought experiment. Assume that I have a business, and I want to borrow $10,000 from Dan as a LOAN to finance the business. The terms are typical – I pay back the principal, plus interest, on a regular schedule. If the business fails, Dan is a creditor and we liquidate the business and he receives a percentage (some amount of cents on the dollar, from 90 cents to 5 cents) depending on what my failed business can be sold for. WHY would Dan loan me money? He may have some cash available and would like a steady stream of income (interest) and a relatively low risk of losing his principal.

Now let’s say that the business is in trouble. I go to Dan and say… how about I pay you maybe 30 cents on the dollar, and you take these new loans and your investment is now worth only $3000 plus the interest on the $3000 (assuming I pay it out). My old obligation to you is null and void. And, oh yeah, I am going to go talk to all the newspapers and local reporters and tell everyone how great I am at managing the business and put my face on the cover of a major magazine, beaming. 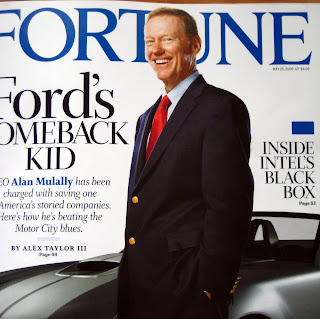 This is pretty much an analogous scenario to the situation facing Ford motor. While Ford motor has done some things better than its two brethren in dire straits, and has been willing to make tougher choices like sell of brands such as Jaguar and Range Rover (to Tata) and has done other things right, the MAIN reason that Ford is alive while GM and Chrysler are circling the drain is because the prior CFO took out $23 billion in bonds, essentially hocking everything Ford had, when the markets were easy on financing (now Ford would never be able to raise those kinds of funds at those low rates). 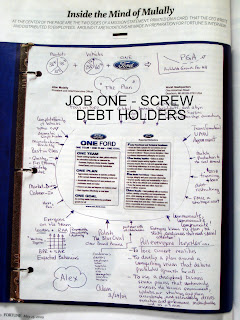 Here is Mulally’s business plan (edited, obviously). Certainly, compared to the management at Chrysler and GM, he is a relative genius, the veritable “one-eyed man” among the blind. I helpfully updated the plan so that we could see the most important reason for his success, which is his shameless cram-down of debt holders and having them exchange debt while Ford HELD THEIR CASH to use on Ford’s cash-burning operations.

I realize that “theoretically” the fact that he is exchanging debt outside of bankruptcy isn’t that different than exchanging debt through bankruptcy, but the fact that they are doing it without any regret or remorse shows the type of character that they have. I also realize that the people who own the bonds today mainly bought them on the secondary market and figured that there would be some sort of distressed exchange, and were trying to get more from Ford than they paid for the bonds. But the ORIGINAL bond investors were the ones who were holding the bag, so to speak.

Note that bond investors and equity investors are not the same. Bond investors basically want their money back, along with an interest income. Equity holders want to take a ride on the business, hoping it is profitable or otherwise valuable and that their equity stock price increases. They KNOW that they are taking a major chance, while the bond holders are trying to preserve their capital.

I do think that at least he should acknowledge that a huge part of their advantage is 1) the fact that they issued debt in huge amounts among historically very favorable terms 2) that they have the chutzpah to use all this cash to run their operations on the short term without considering the long term needs of the bondholders 3) that they have no shame in squeezing out better terms to leverage the fact that this cash will be burned, anyways.

ANYONE who loans money in the future to these types of entities, or is an investor in a fund that does, is a SUCKER, unless there are very rigorous terms for the use and return of these cash assets. Character does matter, and firms and individuals that without shame squeeze you aren’t people that you should do business with in the future.

So stop beaming while the bond holders burn…