I remember reading stories in the 70’s and 80’s about defectors from the Soviet Union that were brought to the United States (notably Victor Suvorov who wrote a series of books I liked a lot as a kid, including “Inside the Soviet Army”). The Allied handlers would take the defectors from the Eastern Bloc to grocery stores in the United States and they would gawk at the massive abundance of items for sale, since there were very limited quantities of consumer goods available in the USSR at this time. 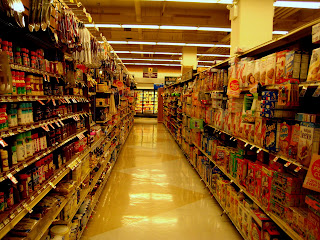 I can empathize with those defectors nowadays when I go to a “suburban sized” food store. I shop at a local “city sized” Jewel which has tiny aisles that are usually packed with customers (I waited until it was empty to take this photo) and the store only has a few aisles so you can navigate through it quickly. However, the local Jewel seems to have pretty much everything I am looking for; I rarely have to go anywhere else to find something for a recipe. Since I am also carrying my food a few blocks back home, I can’t impulse buy like you would at a local Costco because it is no fun to lug that all back home (especially if it is raining and you can’t carry an umbrella because your hands are full – you are like a wet dog when you get home). 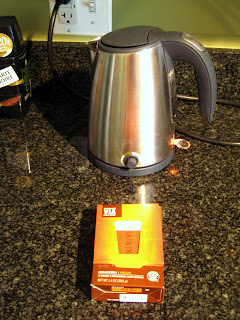 On a similar “small is better” mode I was in London and was kind of taken with the idea of an instant tea kettle. In London they are used for tea (duh) but here I thought I’d try it for making instant coffee since I have been seeing those Starbucks advertisements everywhere. With my old coffee maker I’d make about 3-4 cups but I usually wouldn’t drink it all and any cup after the first had kind of a bitter burned taste, plus then there are the coffee grounds around, to boot.

I really like the kettle – got it for about $60 or so on Amazon – and am trying out the instant coffee. The Starbucks coffee is the best – it is very granular and fine and makes instant coffee without the “head” like you get with the cheaper instant coffee – but it is about $1 / cup. On the other hand, you can get instant coffee in similar “throw away” single serving sizes from other vendors for much less (I think it was $4 for 20 servings). The tasters choice coffee wasn’t as good (it had a bit of a head) but still better than traditional “Sanka” type coffee that you scoop out of an instant container.

The verdict so far – fun with the kettle – I like the way it boils water so quickly and the fact that the second cup (if I have one) isn’t burned – and the Starbucks instant coffee is the best, but way too expensive. I will try out a bunch of the instant coffee alternatives and see if I can stomach them, or if it is just “Starbucks or bust”. Maybe I will try some English teas…