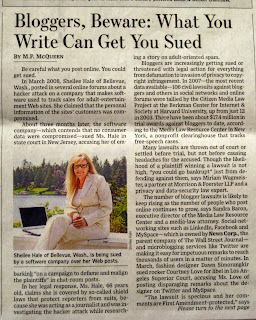 The Wall Street Journal article titled “Bloggers, Beware: What You Write Can Get you Sued”. The article started with a discussion of a woman who was sued because she was in a dispute with a software company over accusations that customer data was compromised in an online forum. She was sued for defamation and she claimed protection under the “shield laws” which protect traditional (print, television) journalists. Her insurance company, Allstate, was paying for her legal costs under her “umbrella” insurance policy which is designed to fill in for potential issues not covered under auto and home owner policies.

Traditional issues with the web related to copyright infringement issues; one time I ran a different site that was hit with a “cease and desist” letter for publishing data about a certification process (not specific testing information) – I took the information down and posted the letter on the site instead. Nowadays it seems that much of the copyright infringement issues have migrated to downloading music because of the revenue losses; the newspapers and other institutions don’t seem to be going after blogs much.

One useful tip from the WSJ article was to talk to your insurance company for a rider as part of a special addition to your homeowners policy that will cover what you say or do on the web (within reason, of course). The WSJ said that this might only cost $30 / year, which may make it worthwhile. One element that could possibly make a difference is whether you are blogging as a “business” with advertisements – at LITGM we don’t have advertisements (forgoing the $2 / month we might earn) but there are some at Chicago Boyz.

Another related item is posting a retraction; when I recently put up an article about a US Democratic congressman driving a gas-guzzling SUV I received comments from the US House of Representatives (we can see where the IP addresses are coming from) – I retracted my specific post but then did more research to clarify that the situation was still essentially the same as I had originally reported (the US Democratic Congressman drove a substantially identical SUV per a local TV station). I don’t know if publishing a retraction helps you or not but it seems like a reasonable place to start.

Figuring that bloggers have a lot of time on their hands and like to put stuff up on the web I did a tiny bit of research and found an excellent site at the Electronic Frontier Association that covered the types of issues that bloggers typically face and possible solutions. Even if you are pretty familiar with these issues you might want to check out this link because they updated it in February, 2009 to deal with the latest updates. I am going to research this issue further and may consider joining this organization. One key item that they are fighting for is to get bloggers covered just like journalists as far as protection under the US Constitution.

2 thoughts on “Blogging and the Law”