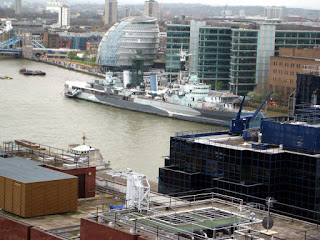 When I was in London recently I went to the top of the monument to the Great London Fire of 1666 (the site is cool; it has history information as well as a view from the top of the monument, updated every 60 seconds). From the top of this tower I saw what I was looking for – a great place to get a photo of the HMS Belfast, a British cruiser from WW2. The wikipedia site for HMS Belfast is a good place to start for information about this hard-working vessel – I was going to classify her as a “light” cruiser (due to the fact that she carried 6 inch main guns, while heavy cruisers carried 8 inch guns) but I read that after repairs from 1939-42 (after she hit a mine) she had been rebuilt and was the heaviest cruiser by tonnage in the British navy at the time, so I will just call her a cruiser.

While I have been to many museums in the United States that feature large WW2 and Korean era warships, such as the carrier Midway in South Carolina and the carrier Intrepid in New York, among others, there are comparatively few large ships that have been preserved in Europe and Asia. I believe (and semi-confirmed from this site, which is interesting) that the HMS Belfast is the only big-gun ship that has been preserved from the world wars in all of Europe. I heard a rumor (can’t find the link) that there even have been calls from Germany to bring back the Prinz Eugen (currently upside down at Bikini atoll, where she was blasted after WW2 in atomic bomb tests) back to Germany as a museum (very highly unlikely, of course).

There are many logical reasons why there aren’t museums for Germany and Japan – their capital ships were mostly bombed to oblivion by the Allies in WW2 or confiscated after wards, which is how the Prinz Eugen ended up all the way across the world in the Pacific. Italy is slightly more complex, since some of her ships made their way to the Allies after she switched sides in 1943, but they clearly had bigger problems than retaining capital ships in the years after WW2. France had some surviving ships that served with the British, but none of the major ships were preserved, and there weren’t that many to begin with. The Russians were never a big naval power in the first place, and nothing big from WW2 was preserved (although a lot of their fleet is rusting in place today). Of the big maritime powers, only the US and the UK (along with Canada and Australia) weren’t occupied (or almost totally occupied, in the case of Russia) at some point along the way, which is why their ships are all gone.

I think that something important was lost when all of these big-gun ships were scrapped or destroyed. The HMS Belfast, in London – is about 10,000 tons – a relative pygmy compared to even the smallest battleship or even a major ship from WW1. The German WW1 battleships scuttled outside Scapa Flow in 1919 (they were sent to England as part of reparations) were over 20,000 tons apiece, for example. Here is a link of some cool videos that divers have taken of these WW1 German battleships which still lie in the mud off Scapa Flow.

These ships were amazing technological marvels – they often had more than 1000 sailors and required a vast industrial capability to construct the engines, turrets and steel plate for protection. These ships also required large drydocks and the ability to make wartime repairs – for example the HMS Belfast required 3 years of repairs after she hit a mine in 1939 and they were able to bring back ships from the mud of Pearl Harbor and float them after being torpedoed in Taranto, in Italy.

As a kid growing up I read everything I could about the WW1 and WW2 heavy cruisers and battleships. I found them to be beautiful and fascinating weapons, and played encounters between them, real or imagined, in board games, miniatures, and finally on the computer. But they are all gone now, at least in Europe and Asia (except for the Belfast), and that makes me kind of sad. But the world changes, and we move on.