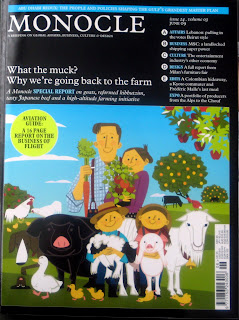 Recently there have been a flurry of articles about farming and “returning to the land” in various Western magazines and newspapers. This headline in the most recent Monocle is typical of the trend – a few city-dwelling Japanese are considering a return to farming given recent economic events and also the fact that farming seems more eco-friendly and popular nowadays.

While returning to organic farming in the West on a modest scale or hobby farm is more of a “personal growth” type activity, the farms in the West are of course extremely productive, using intensive agriculture, fertilizer and optimized seeds, as well as mechanization. The small organic farmer movement is more for media show than a viable long term strategy for feeding Earth’s billions, although certainly it has its place as long as people want to pay the requisite higher prices it entails.

In Africa, the population is exploding – from what I have been able to gather it is north of 880 million and probably closing in on a billion soon – and most of Africa is importing critical foodstuffs. African “governments”, which are mostly a collection of individuals who achieve power and utilize it to enrich themselves and their cronies, do not focus on agricultural needs since most of the population has migrated to vast cities and shanty-towns and their power base moved with them (they DO focus on mineral rights and oil, of course).

This article from the Economist called “Outsourcing’s Third Wave” is eye-opening – it describes how foreign governments are negotiating with African leaders to buy / rent / run large tracts of land for the purpose of growing food in Africa for importation back to THEIR home countries. From the article:

The Saudi programme is an example of a powerful but contentious trend sweeping the poor world: countries that export capital but import food are outsourcing farm production to countries that need capital but have land to spare. Instead of buying food on world markets, governments and politically influential companies buy or lease farmland abroad, grow the crops there and ship them back.

Not only are foreign countries obtaining rights to the land itself, they are bringing on laborers to work the land. I can’t seem to find solid statistics on the web, but the economist article says that there are “1 million” Chinese laborers in Africa and this article says that it was estimated that there were 750,000 in 2008.

The Chinese are getting around the traditional difficulties of development in Africa in a novel way – by not involving Africans. They bring in their own labor, build their own compounds, and run the projects themselves. The scale of this effort is not well known because it isn’t in the interest of the African governments nor China’s interests to publicize this information, and neither of them gives a hoot about free journalism in any case.

It isn’t only the Chinese – the Koreans were involved in a recent deal to be able to farm on a significant portion of Madagascar’s available land – and this contributed to a political revolution which put these plans at least on temporary hold.

The Middle Eastern (Saudi Arabia) and Asian (Chinese, Korean) companies involved in these sorts of deals are subject to different types of ethical constraints than Western companies, in say, Europe or the USA. It is frankly unimaginable that a US company would be able to get the rights to a giant tract of farmland in this day and age and use it to farm foodstuffs to ship out of an African nation while locals are dirt-poor and either starving or importing food at the same time.

The Chinese have an additional advantage – a huge pool of untapped labor. They can send their citizens abroad and they know that they will work hard and not engage in systematic unrest or organize into unions. The numbers of overseas Chinese laborers is very large, if these numbers can be trusted or verified.

It is also a terrible, sad failure that the African countries can’t manage this sort of farming themselves. Africa has been freed of the colonist influence for generations, and they have not focused on their key competitive advantages, which are 1) cheap and abundant labor 2) land and climate for farming. Their other advantages of mineral wealth and oil are able to be exploited by Western companies (mostly) with little indigenous assistance; the only real issue with those resources is overall security and whom to pay off with the locals’ share of the money. After the colonists left in the 1950’s and 1960’s some African countries experimented with heavy industry but for a lot of (obvious) reasons that failed but agriculture is an extremely logical area for them to emphasize.

The fact that foreign nations are 1) gaining huge leases or rights to farm African soil 2) using non-local labor in many circumstances is just a terrible problem for a continent that needs to develop local skills and capacities in order to start to develop some sort of solid economic framework.

Compounded with the fact that African countries are generally undergoing a population explosion (unlike the West and even much of Asia) and their citizens are packed into miserably crowded and infrastructure-poor cities, and even importing food, this is a catastrophe.

I praise the Economist and other journalists for bringing this issue up but it has received a minuscule level of overall coverage, given its large potential repercussions. Essentially:

– desperately poor countries whose only assets are cheap labor and land suitable for farming
– are so “broken” that they lack the infrastructure to run a farm economy and bring foodstuffs to market
– so that they are giving out long term leases to third countries
– to bring in third party labor to run these farms and export the food
– with the local government leaders the only beneficiaries
– while the local populace shares none of the benefits (money from labor, rent from land)

When I read about newspapers and magazines talking about how once their business model fails, there will be no more tough investigative journalism, I ask myself – where is this investigative journalism today? Who is sending journalists on the ground to see what is happening, as starving countries give away their land for a pittance to China? Why isn’t this a story that is being put on the front page? Why, when I look this up, do I find more links to Madagascar the movie for children than Madagascar, the country that just had a revolution to topple the government that was going to lease out a huge portion of their arable land to a South Korean conglomerate?

Don’t forget the last related item – that while the African farm economy fails and is being sold to third parties, their population is exploding. For example, in Madagascar, the site of the revolution, here are some population statistics:

When compared with the United States

Likely there is too much here for a single post, and I need an editor. Hopefully this causes you to think about this and do your own research, and come to your own conclusions. I personally thought that these items were rather far-reaching in their effects and was surprised by the muted coverage of these deals.

7 thoughts on “Farming And Africa”