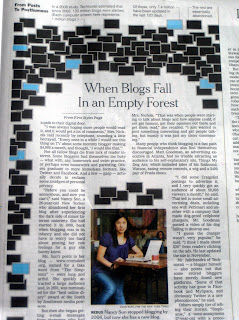 A recent article in the NY Times titled “Blogs Falling In An Empty Forest” described the apparently common phenomenon of people starting blogs, and then abandoning them. Per the article

According to a 2008 survey by Technorati, which runs a search engine for blogs, only 7.4 million out of the 133 million blogs the company tracks had been updated in the past 120 days. That translates to 95 percent of blogs being essentially abandoned

The article went on to describe some common situations; a stay-at-home mom trying to earn some money from her blog, or talking about their personal beliefs and such. The blogs seemed to promise profitability, but didn’t deliver, even if they had a reasonable amount of page views.

And what is the marginal cost for setting up a blog? Why it is roughly zero, of course. And with millions setting up blogs and “chasing” (or not, in the case of LITGM and many other blogs we know and like) page views and advertising dollars, the market was instantly overloaded with choices and soon became a mass of abandoned blogs.

Beyond the economics of overwhelming choice (and resulting low average quality), another element is that people think that everyone is interested in their thoughts. In general, unless you have some compelling element (attractive, unusually funny or provocative), or are an excellent writer, or pick unique topics that you know well, your blog probably isn’t that interesting. No one is going to keep coming back to a boring blog.

Today many (most) people have likely moved on to facebook and twitter – these sites have taken a lot of the thunder that blogs used to have when they were shiny and new. The heyday of blogs has likely come and gone, replaced by these new horsemen, along with anything that runs on an iPhone (or an iPod Touch, if you are cheap like me and don’t want to pay $100 / month but like cool apps on a tiny screen).

In blogging using Blogger software, owned by Google, we are essentially providing fodder / content for the Google search engine. Nothing is cheaper than hiring us, after all we are free (over at LITGM, at least).

12 thoughts on “Blogging and Marginal Cost”