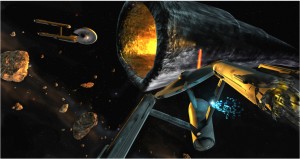 First the once-great city of Detroit, then California, and soon the entire country if we don’t come to our senses, and fast.

Heh. Here’s a video if you don’t remember the episode.

Can’t say he’s wrong. Leftists have progressively destroyed the economic vitality of every region they dominated for more than a few decades. They do seem inexorable at times but I think we need to remember that things looked equally bleak back in the ’70s after leftists trashed everything. But the nation as a whole recovered and prospered.

Our diversity and compartmentalization remain our great national strength. If one region destroys itself with foolish policies, others can still prosper. California and the Northeast are failing but Texas and other similar states are prospering.

Perhaps this crisis will prove to be the end of the doomsday machine. Perhaps, like the Star Trek doomsday machine, their greedy, selfish overreach in this time of crisis will cause them to choke to death on the cream of their own runaway spending. This happened in the ’70s and led to the rebirth of the ’80s. Let’s just hope it doesn’t take as long this time.

18 thoughts on “The Leftists’ Doomsday Machine”