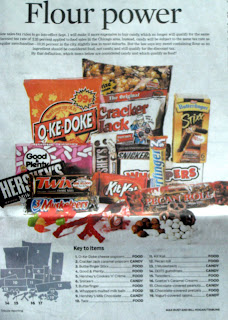 – Effectiveness – does the tax program raise the revenue in a manner that is cost-effective and have the lowest level of harm and distortion to the overall economy?
– Incentives – if the tax program is designed to promote a certain type of activity or “deter” a different type of activity, do the incentives actually drive the behavior that the law is intended to achieve?

The photo above is from an excellent Chicago Tribune article about a change in the Cook County (Chicago) sales tax rules which mean that “candy” is taxed at the highest rate (10.25%) rather than as “food” which is at a significantly lower rate (2%).

This tax shows the “down the rabbit hole” elements of tax complexity when incentives and effectiveness go haywire.

From a complexity standpoint, this makes no sense. Lots of items contain flour and are thus counted as “food”, but for the small shop owner, explaining this to staff and customers will be a difficult and time consuming process. For large retailers it likely won’t be as big a deal because this is all calculated by the register.

From an incentive standpoint, this makes even less sense. Since sales taxes are highly regressive, which means that they sock the poor harder than the rich (since the poor consume almost all of their income, and pay a high percentage on food), you could understand how the state might want to exempt food. But the line between candy and food is now blurry and complicated.

And really… is it good public policy to tax kids more for candy bars? Come on.

Other taxes going into effect on September 1 include a rise in the liquor tax. At the local Binny’s where I shop in River North they have signs telling everyone to stock up before the taxes go into effect. Per this bill (go to pages 117-118) you can see a very significant rise in the liquor tax rate – this blog called “thinking of drinking” made the following calculations:

Just for comparison, the state tax rate on spirits in neighboring states are:
Indiana: $2.68 per gallon
Missouri: $2.00 per gallon
Wisconsin: $3.25 per gallon

So we were already significantly higher than the three states near us with similar alcohol regulatory schemes.

The blog did an excellent job of calculating the impact as well as showing our comparison to neighboring states, since many individuals have a choice of where to buy their liquor, especially “hard” liquor and wine that has a longer shelf life (you probably are almost always going to buy beer locally).

Raising the tax on liquor always seems to serve a public policy need (or can be relatively easily justified, as opposed to a tax on food). Taxing different levels of beer / wine / liquor makes less sense – is beer the best for society, then wine, then harder liquor? I don’t know if I can follow that logic. I don’t know if it is related, but the Sam’s Liquors in the South Loop just closed; business was probably slow and they figured that this would just be a further burden.

The saddest part of all this is that in Illinois, at least, government remains unreformed, and raising taxes is the easiest way out for our current Democratic regime. While Chicago did symbolically “shut down” for a day recently, in general cuts to our government have been minimal and we haven’t even started to roll back the featherbedding, high benefits, early retirements, and general ineptitude that marks most of our state government, not to mention the outright corruption that employs a mountain of FBI investigators.