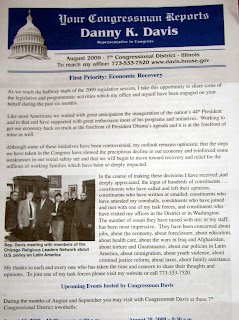 When you see the tall buildings of Chicago and hear the history as a dynamic, leading center of industry and innovation, you’d expect that our local representative in the US House of Representatives would embrace measures to keep this sort of talent and engine of growth humming at high efficiency. But instead we get… Danny Davis, our 7th Congressional District representative (D).

Our Illinois districts have been completely gerrymandered so that the south side of Chicago and a slice of the suburbs going west, along with the loop and River North itself, fall into a single district. Here is a map link if you want to see a veritable “case study” in gerrymandering. Thus the representative, Danny Davis, treats the loop with its engines of economic growth as an afterthought and concentrates on the other constituents, mostly the poor, who reside in the rest of the district.

From the latest newsletter, discussing issues raised to Danny Davis:

They have been concerned about jobs, about the economy, about foreclosure, about education, about health care, about the wars in Iraq and Afghanistan, about torture and Guantanamo, about our policies in Latin America, about immigration, about youth violence, about criminal justice reform, about taxes, about family assistance

While certainly these are valid issues to be raised by constituents, no where is mentioned the types of policies that would keep the Loop, THE DISTRICT HE REPRESENTS, a leading beacon of business. These items would likely include:

1) the fact that the United States has the most unfavorable corporate tax regime, with the highest rates, in the developed world?
2) the fact that Cook County has the highest sales tax rate in the United States, a major drag on local businesses (especially since virtually everything is available tax-free and with low cost or free shipping on the Internet)
3) corruption so prevalent that it has made Illinois a world wide joke with Blago, which is a dis-incentive for companies to locate or invest in Illinois
4) the fact that Chicago leads the nation in murders in an absolute sense, while having only a fraction of the population of New York, and that honest citizens have no formal right to bear arms while gangs terrorize the populace and shoot up the city
5) pending changes to regulation in the banking and financial services industry, since the Loop is home to many companies in this industry
6) scheduled raise on taxes from liquor to candy to everything else, which will continue to hurt local business activity
7) the super-high property taxes in Cook County, especially on businesses, which is a major burden on our already overbuilt commercial property sector
8) the fact that the state is virtually bankrupt, with pending income tax raises the likely “solution” rather than cutting our expense base which will make the city even less competitive or likely to attract talent

I do have respect for Danny Davis in that he doesn’t even PRETEND to care about the above items – he represents his constituents, and the loop and River North just happened to be gerrymandered into his district as an afterthought (mostly likely just to make the district contiguous).

7 thoughts on “Danny Davis My Representative”