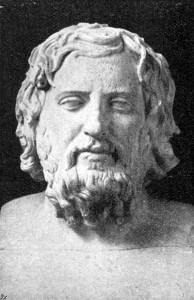 Our Xenophon Roundtable begins this week.

Xenophon’s Anabasis of Cyrus was written roughly 2,400 years ago. Yet it is still of interest and value today, for many reasons. It is an exciting tale of adventure. It is the first war memoir. It is a firsthand account of a military campaign that goes badly wrong, and of a man taking command and saving himself and his army from destruction. It is a travel book about exotic locales and natives. It depicts leadership under life and death circumstances. It contains remarkable examples of oratory and persuasion, where Xenophon had to convince because he could not compel. It is a portrait of conditions in the era following the victory of Sparta in the Peloponessian War. It is a comparison between the Greek way of political and military organization, and that of the Persians and other “barbarians”.

There is a lot in this very old book. I and the other participants will be putting up several posts in the next three weeks about it. I look forward to what the others will have to say.

UPDATE: Zenpundit’s announcement has some good comments about the translation we are using.

Our distinguished roundtable participants are the following:

Disraeli1867 is a graduate of the College and the Business School at the University of Chicago. He works in venture capital and equity research. He was a European History major, and he is a Certified Mongolian Warrior (for real) and spends his spare time curling, sailing and reading history.

“josephfouche” is a software engineer and system administrator slaving away for a technology startup somewhere in flyover country. He’s been reading military history since age nine and talking about it since his fourth grade teacher, asking a pro forma question, inquired if any student in the class knew anything about the Crimean War. (She got more than she bargained for.) He blogs at The Committee of Public Safety, a group blog dedicated to understanding the subtle interplay of human nature, culture, war, and power.

Fringe is a University of Chicago Alum, and is employed as an academic. He has been a student of military history and military affairs since his childhood. He knows strategists, and understands the difference between a strategist and a student of strategy. He has published on many topics and in many venues, including articles about modern warfare.

Lexington Green is a lawyer in Chicago. His common core humanities class freshman year at the University of Chicago was Greek Thought and Literature. It was the only A he got that year. He blogs at ChicagoBoyz.

HistoryGuy99 is a historian, and U.S. Army veteran of the war in Vietnam. After having a 30 year career in global logistics, he earned an advanced degree in history and began to teach. Currently he is an adjunct history professor with the University of Phoenix and Axia College. He blogs as historyguy99 and hosts HG’s World, a blog devoted to history, connectivity, and commentary. He is a co-author of soon to be published, Activist Women of the American West and contributing author to The John Boyd Roundtable

Steve Pressfield is the author of “The Legend of Bagger Vance

” and other historical fiction set in the Greco-Macedonian era–but nothing about Xenophon! Currently blogging about mil/pol issues in Afghanistan on It’s the Tribes, Stupid

Purpleslog is a Milwaukee-area blogger looking to enjoy and learn from an ancient true-life adventure story. He blogs at PurpleSlog.

Mark Safranski was the editor of The John Boyd Roundtable: Debating Science, Strategy, and War

, and a contribution author to Threats in the Age of Obama

, both published by Nimble Books. Mark blogs at Zenpundit. Mark can also be found at several well-regarded group blogs including, ChicagoBoyz, Progressive Historians and at a U.K. academic site, The Complex Terrain Laboratory. Mark is a free-lance contributor to Pajamas Media.

Seydlitz89 He is a former Marine Corps officer and US Army intelligence officer who served in a civilian capacity in Berlin during the last decade of the Cold War. He was involved as both an intelligence operations specialist and an operations officer in strategic overt humint collection. This experience sparked his serious interest in strategic theory. He is now involved in education. He participated in the Clausewitz Roundtable on ChicagoBoyz. He blogs at MilPub.

Dr Helen Szamuely is a political researcher and writer. She edits the Conservative History Journal and writes its blog. She also blogs on EUReferendum and Your Freedom and Ours, as well as writing occasionally for Chicagoboyz.

Mitchell Townsend says “I majored in English as an undergraduate. I didn’t know any better, since this was the first time one of us had gone to college. I got a low-level government job during the Carter administration, which turned me into a knuckle-dragging, kitten-torturing, right-wing death beast. While this hideous transformation was in process, I went to remedial education classes to learn accounting and eventually became a CPA. I grew up in Connecticut (not the Gold Coast, the part where they hate the Yankees) and live in Massachusetts. I have no connection with Chicago at all; I just joined ChicagoBoyz because I liked reading it. In fact, every time I go, I am amazed at how flat and rectilinear the place is. Chicago, that is, not the blog, which is flat and rectilinear because it has to be.”