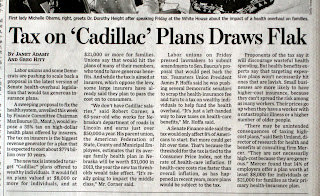 I try to stay away from the non-fact maelstrom that is our current, utterly dysfunctional “debate” on health care reform (I put that in parenthesis because I don’t even know what the latest, half-baked plan du jour even is without an up to the minute scorecard).

However – the health care publicity did bring to light and start to quantify one item that could be useful in the future when this all dies down (and hopefully goes nowhere) – the high cost of health care for our governmental employees.

This article discusses “gold plated” health care plans and their cost, and the fact that under some proposals these plans would be subject to an excise tax. From the article:

“We don’t have Cadillac salaries”, said Robert Corner, a 63-year old who works for Nebraska’s department of roads in Lincoln and earns just over $50,000 a year. His parent union, the American Federation of State, County and Municipal Employees, estimates that it’s average health plan in Nebraska will be worth $31,000 in 2013, the year the new tax thresholds would take effect.

But Mr. Corner – you DO have a Cadillac salary when you take into account the health plan that taxpayers have given you, one likely with small co-pays and very few restrictions. Many of the union plans here in Illinois involve the workers paying almost NOTHING towards their care, and rumbles of a strike whenever they are asked to contribute a dime.

For years public employees have taken advantage of various schemes to increase their pension benefits, such as getting a raise right before retiring so that they can receive higher lifetime payouts – and some of these items have started to get some coverage in the press (such as a recent articles describing the number of individuals who have received more than $1 million in cumulative pension benefits from the state of Illinois).

However, we haven’t focused on the cost of health care plans for these employees, and how they are essentially bankrupting the state. Putting a price on these plans, such as the $31,000 / year for this worker, plus his pension benefits, and the fact that state workers are of course very likely to take disability somewhere down the line (when you pay their salaries for no work at all), then you can start to see the true cost of all the government employees in our midst.

We need to do more to show the true costs of each of these workers so that we can make sure that states are employing automation, outsourcing, and minimizing their overall impact on the economy rather than employing such expensive workers on the backs of the taxpayer.