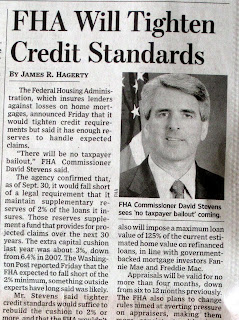 Today the FHA, the Federal Housing Administration, is a gigantic player in the residential mortgage business. The FHA guarantees mortgages against default, and allows purchases of homes with only a 3.5% down payment, and provides a rock bottom interest rate of near 5%. These lenient terms apply to virtually everyone, even those with poor credit scores and little equity in the home, which are highly correlated with default. This is in addition to the $8000 tax credit the US Government is issuing to first time buyers, which is boosting demand for these sorts of loans.

This article describes the measures that the agency is taking to reduce the odds of a bailout, but they don’t hit on the core issues of low down payments and not adjusting the interest rates to better reflect the risks on lower credit quality mortgages. These half-hearted measures require a tiny base of assets for mortgage originations (up to $1m from $250,000) and some changes to appraisals… the core issue here is that there were massive amounts of fraudulent mortgages that flooded into the system during the boom and when they went awry the brokers that backed them vanished into the night.

Many have pointed out that the FHA looms as a likely candidate for government bailout, such as this article from the Washington Post, titled “FHA’s Refusal to Seek Bailout Met With Skepticism”

FHA Commissioner David H. Stevens said Friday that the surplus fund set aside to cover unexpected losses on mortgages backed by the agency will fall below the 2 percent threshold required by Congress when the next fiscal year starts in October.

Although the reserves had remained well above the minimum required level during the housing boom, the audit last year showed they had shrunk to 3 percent as of Sept. 30, compared with 6.4 percent a year earlier. The fund’s value was estimated at $12.9 billion, down from $21.2 billion the previous year.

Many stories note that most of the loans that are being done today are backed by the FHA. From this article in the Wall Street Journal titled “No Easy Exit for Government as Housing Market’s Savior”

The Denver home lender sees every day how dependent the housing market has become on the government. At the height of the boom, just 20% of Universal’s mortgages were backed by the Federal Housing Administration, an arm of the government that guarantees loans to borrowers who can’t afford big down payments. Today, the FHA accounts for more than 80% of his business.

Also note that the US Government is buying most of the securities that are backed by the FHA. Private banks are not interested in purchasing securities with low returns and thus the government secures the loan on the front end, and then repurchases the securities on the other end.

At the Fed, the question of whether to start dismantling the scaffolding is a dominant one. Since the beginning of the year, the Fed has purchased $836 billion of mortgage-backed securities issued by Fannie Mae, Freddie Mac and Ginnie Mae, the federal body that securitizes FHA loans. The purchases have helped push down interest rates on mortgages guaranteed by the firms from more than 6.5% last October to 5.15% today, according to HSH Associates, which tracks the mortgage market.

The FHA loans are up to a level of $417,000 across the US, with some exceptions for high cost areas in California, New York and Washington DC, where the loans are up to $729,950.

While the Federal Government has been propping up the “low end” of the housing market, with:

– $8000 housing credit for first time buyers (capped by income, of course)
– low down payment and low interest loans pretty much regardless of credit scores for loans up to $417,000
– then the government buys the securitized loans on the back end to further prop up the market

The higher end market, or “jumbo” loans, have pretty much evaporated. Here the data starts getting more anecdotal. I have friends and acquaintances who have been involved in purchasing or selling houses that are above the $417,000 level here in the Midwest.

First of all, regardless of the pretty chart that says “jumbo loans are at 6.5% while FHA loans are around 5%” (such as the one in the WSJ article) there are many other restrictions on these non FHA loans. From the information I have heard there are few banks that are even considering making these loans, and you need to deal with the few that choose to be in this market. You can’t just assume that these loans are readily available.

And for the down payment – the serious element in the equation – I have heard that 20% – 30% is not an uncommon requirement, along with a deep dive into your finances. A friend of mine who tried to buy a 2 flat in Philadelphia and had good credit and an ability to do a high down payment – said that he simply couldn’t find anyone to make him a loan.

Why the disparate down payment requirements? Because at the FHA, the risk of the loan going bad is with the government, to be borne by the tax payer. And the government is buying the paper on the other end, to keep this market flowing.

But for the non-conforming loans, the banks have to take risk. And the banks aren’t as dumb as they used to be – they know that the housing market can rise and fall, and they want to make sure that they aren’t on the hook for any losses. Not only do they want a higher return (interest rate), but they want to protect themselves with a lower loan-to-value ratio so that if markets fall 20% or more they are still insulated from a loss of principal. Essentially they aren’t making the same mistakes twice.

What this means to you is that if your residence is more than $417,000, the VALUE of your residence has certainly been impaired, and you should strongly consider the risks of buying any house that would seem to require a mortgage of more than $417,000. The number of buyers for this type of residence, given that they can’t get mortgages, has plummeted. These buyers need to be able to come up with a very significant down payment and go through major hoops to get a mortgage, and people with this type of credit rating and available resources can be very picky when choosing a home.

Your house is only worth what someone else will pay for it; if the pool of “effective” buyers (those that can afford higher interest loans, make a big down payment, and deal with the additional paperwork) has diminished, your group of potential buyers has decreased, and so has your investment.

An additional difficulty is that if you are trying to sell a house worth more than $417,000, there is a high probability that the potential buyer is also trying to sell HIS or HER house and having problems on their end, too. Thus the problems multiply on both sides of the equation.

I don’t think that enough articles have been written on this schism in real estate values; that the low end is being propped up (dramatically) with government support, and the high end will now be stratified into high cost mortgages with high down payments and reduced loan availability.

Unless the FHA changes their rules and starts increasing above $417,000, I would recommend thinking long and hard about buying a house above that range, and if you are in the market and have financing you are in a pole position in terms of leverage against a potential seller (assuming you can unload your house to a buyer, of course).

For better or worse the government has encouraged home buying on the low end, and is letting the high end rot. Whether this is good or bad policy depends on your perspective, but it needs to be recognized that the high end is going to be punished over the long term and this will severely impact these investments as a class.

1 thought on “The FHA and Impact on Real Estate Values”