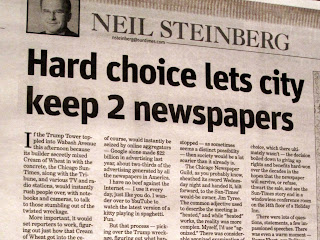 Traditional newspapers are under intense pressure from a financial perspective. Newspapers provide much of the material that is linked to on blogs and other websites but they make little money for providing this service, while Google (owner of Blogger, which runs many sites on the internet) is a financial and stock market titan.

In addition to the financial threat, newspapers have a more “existential” crisis as they attempt to justify their role in the new world. They are often “scooped” by blogs and other media, which feature focused, partisan and expert writers on specific topics, as opposed to the “generalist” model used by traditional journalists.

In Chicago the Sun-Times has been rescued from bankruptcy by Jim Tyree of Mesirow Financial, who paid $5M and assumed $20M in debt for an enterprise with $200M of revenue / year. This rescue was accompanied by significant work rule changes from the unions that run the Sun Times, which are supposed to enable Tyree to restructure the enterprise to become profitable.

With all of this drama, the Chicago Sun-Times had an excellent opportunity to re-establish their voice and champion their role as journalists and their importance to the city. Let’s hear what they had to say in an column by Neil Steinberg titled “Hard choice lets city keep 2 newspapers“…

If the Trump Tower toppled into Wabash Avenue this afternoon because its builder secretly mixed Cream of Wheat in with the concrete, the Chicago Sun-Times… would instantly rush people over… to talk to people stumbling out of the twisted wreckage. More important, it would set reporters to work, figuring out just how that Cream of Wheat got into the cement, and what we could learn from the fiasco.

The question that the Sun-Times needs to answer is WHAT would be missed if they were to exit the scene, and HOW that would impact the citizenry of the City of Chicago and the other cities that they serve.

This completely feeble example is so far off base that I don’t even know where to begin. The most important value of journalism is to get AHEAD of stories before they become disasters, so that the disaster is averted. This means that they learn about an industry or topic, watch what is occurring, and raise the alert to the public before the event significantly impacts the population.

If Trump fell over, we don’t need the Sun-Times – a million news organizations would rush over, especially the glib TV news crews that would thrive on images like this – and the Sun-Times personnel would just be lost in the shuffle. Even E News would probably be there, talking about how this impacts Donald and his girlfriends and TV shows.

The story that the Sun-Times SHOULD have been touting would be their ability to learn about Illinois politics and local corruption and expose it so that the city could reduce taxes and / or improve services for that same amount of taxpayer money. And the corruption is everywhere, along with high taxes, poor services, underfunded pensions, and too many more issues to list. THIS hard, thankless work (the politicians will fight them tooth and nail) is in fact valuable, and if the Sun-Times threw their efforts into this and pared off the things that they do poorly (cover pop stars) this could be an important role and mission statement for the paper.

They need to do something that would be MISSED in the media landscape if it was gone, and pare away everything else that doesn’t support this goal.

Even sports will be a hard one to sell if they don’t get better; ESPN has wall-to-wall coverage and then local fan sites pop up filled with insanely knowledgeable fans who can speak more directly to their potential audience.

Meanwhile, while the Chicago Sun-Times misses the opportunity to define themselves along with most of the “traditional” media, there was a long article in the New Yorker that is highly recommended titled “Call Me – Why Hollywood Fears Nikki Finke” that discusses the enormous impact that her essentially one-woman web site “Deadline Hollywood“. From the article in the New Yorker:

Finke is fifty-five, and a longtime entertainment-business reporter. She runs the Web site Deadline Hollywood Daily out of her apartment in west Los Angeles; in three and a half years she has made D.H.D. Hollywood’s most dreaded news source. Marrying tabloid instincts to a strong Puritan streak, Finke portrays many of the town’s leaders as jackasses who golf at exclusive preserves, elbow underlings aside to hog the spotlight, downsize those underlings while lining their own pockets, and generally besmirch the fabric of civilization. Jeff Zucker, the C.E.O. and president of NBC Universal, is “one of the most kiss-ass incompetents to run an entertainment company”; Charles and James Dolan, who own Cablevision, are a “clown parade”; and Sumner Redstone, the chairman of Viacom, is a “crazy old coot.”

A combination town crier and volcano god, Finke evokes in her readers both anxiety and respect. One top studio executive says, “Nikki’s blog you have to check, and the others you have to delete from your in-box. She’s very, very, very accurate, extraordinarily so—you have a supposedly private conversation with two other people, and it’s on her site within an hour.” She usually posts five to ten stories a day, some of them just press releases or minutiae about elections at the Writers Guild, but many of them transfixing: anonymously sourced accounts of clandestine negotiations; photos of newly fired executives with red X’s slapped across them (after she’d broken the news of their impending demise); boasts of “TOLDJA!” when something happens that she predicted, or, anyway, half predicted; and helpful career advice (“Stick it where the sun don’t shine, you asswipe,” she recently counselled a CBS publicist).

Whatever you think of Finke and her site, you can see that this is impactful journalism. She completely understands her field of choice, and since she is credible she receives tons of tips, and she isn’t afraid to eviscerate her subjects in explicit terms. The traditional dispassionate journalism isn’t turning heads anymore – this is what journalism would look like if it started from scratch, today, which in a way is closer to the bomb-throwing pamphlets back in Paine’s time, as an example than the boring teleprompter reading of the evening news.

If you are also interested in journalism and the history of newspapers, I highly recommend the PBS documentary “Inventing LA: The Chandlers and Their Times” which chronicles the rise of the LA Times and a very interesting review of the start of Los Angeles.