Check out the headline on this AP story: 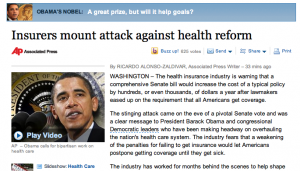 Revealingly, the “attack” is just an industry study of the cost associated with the supposed leftist plan du jour. The horribly unfair and unjust industry conclusion of the evil insurance companies?

The chief reason, said the report, is a decision by lawmakers to weaken proposed penalties for failing to get health insurance. The bill would require insurers to take all applicants, doing away with denials for pre-existing health problems. In return, all Americans would be required to carry coverage, either through an employer or a government program, or by buying it themselves.

But the CBO estimated that even with new federal subsidies, some 17 million Americans would still be unable to afford health insurance. Faced with that affordability problem, senators opted to ease the fines for going without coverage from the levels Baucus originally proposed. The industry says that will only let people postpone getting coverage until they get sick.

It is one of the strange conceits of leftists that they believe that people do not respond to economic incentives. It’s simply common sense that if insurance remains very expensive for people, but they know that by law all insurance companies will have to grant coverage at any time, even if they’re already in the hospital, the economically rational thing for people to do is to delay purchasing health insurance until the very moment they need it. Pointing out that people respond to economic incentives and that they make decisions that provide them the best economic outcome is considered an “attack” by the AP

The AP is so far in the tank they can’t even see out of it.

5 thoughts on “Nope, No Bias Here”