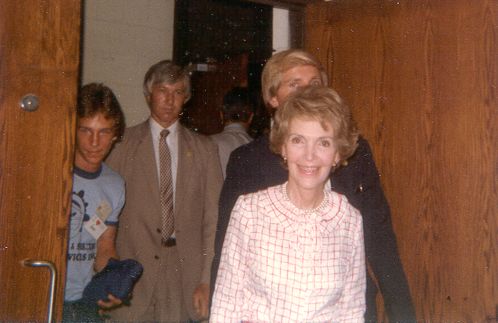 In 1982, First Lady Nancy Reagan visited my junior high school in Ames, Iowa in order to promote youth drug prevention (as part of the“Just Say No” campaign). My memory of that day is vivid. I was standing at the back of the cafeteria which was emptied of its usual lunch tables. The cafeteria was filled with a crowd that spilled out onto what approximated a “hallway,” given the largely open-plan nature of that ’70s era building. Our classrooms didn’t have a full four walls. They had moveable room dividers and no doors and you might be able to hear the class next door. Groovy, man. Except no ’80s preteen that I knew of would use the word groovy. The ’70s were to be firmly pop-culture-repudiated. I remember the First Lady standing on a stage and surrounded by the white hot glare of television lights. How eye-wateringly bright the lights were! And how smooth – almost translucent and pearly – her skin was! Dainty. Controlled. Petite. It was my first real-life encounter with the soft rich textures of glamor.

I can’t remember now why I was so adamant. I wasn’t political as a teen and my hard-working immigrant parents rarely mentioned politics at home. By what form of cultural osmosis had I absorbed the idea that President Reagan was a bad and terrible man? By the osmosis of growing up in a college town surrounded by the children of faculty and life-long Story County Democrats. If you click on the Ames Historical Society link above, you will find an Ames Tribune photograph of a demonstration against President Reagan’s policies held during the First Lady’s visit. “Cheese for the POOR and champaigne for the RICH” reads one sign.

In the college town environments of my youth and early adulthood, Republicans were universally understood to be cold-hearted stupid warmongers. There was no, “I don’t like his policies but I like him personally” stuff. By what process of misremembering and selective editing have we smoothed over the roughest edges of that era, the nasty snide anti-Reagan jokes, the huge anti-Reagan missile protests in Europe, the near universal disdain of the man and the movement among intellectuals? A certain percentage of said intellectuals admired their own personal starry-eyed vision of the Soviet Union and that’s the truth.

You want to know how bad the disdain was in some corners of our society? When President Reagan was shot, my junior high classroom erupted into spontaneous applause. To the credit of the teacher, she became immediately and visibly distressed and told us to stop. She was shocked. I am shocked to remember it. We were nice kids growing up in a middle-class Midwestern college town, dreamily innocent in some ways, and primarily concerned with getting good grades and impressing that cute boy or girl. Yet, our first instinct at that moment was to clap. I remember being surprised at first, then smiling in confusion, then noting that the teacher was upset so that our reaction must be very wrong. How had we preteens thought such horrible behavior appropriate? What must we have heard, day in and day out, for that to be our response? How bizarre. How remarkable. How shameful.

Don’t let anyone talk you into thinking that the rough-and-tumble political world we live in now is something entirely new. If there is a crudeness to it, that is because our society has become more crude. Adult behavior and decorum is not what it once was. John Derbyshire of National Review has a point: our popular culture is filth. (By the way, thinking that doesn’t mean that you want the government to regulate anything and everything, okay?)

BONUS ’80s ANECDOTE: A girl in my Iowa high school was a lesbian and quite open about her sexuality (and this before the days of “Will and Grace”). Now and again, she got roughed up, I think. She wore her sandy blonde hair in a sort of 1950s dippity-do haircut, wore a voluminous keffiyeh wrapped around her neck, and sported wrap-around New Wave sunglasses. She spoke admiringly of the “brave freedom fighters, the brave Mujahideen!” fighting the Soviets in Afghanistan. Well, there you have it. The past is a different country. Except that it’s not.