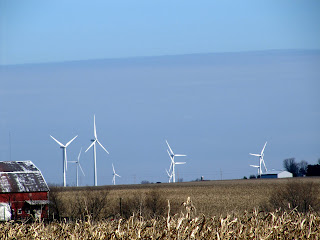 Recently when driving in Western Illinois near the Iowa border I noticed a vast field of wind turbines off Route 20. On the way back to Chicago I got off the highway and started driving on the rural dirt roads to get a closer look.

As you can see from the photos, these wind turbines are huge. They were all turning slowly the day I was there in the wind, with three blades.

Because they don’t produce all the time, aren’t wind turbines an inefficient way to get our electricity?
Wind turbines actually generate electricity most of the time (65 to 80 percent), though the output amount is variable.

This is a strange question. You are wondering what the total output of wind energy is, and this just answers whether or not the turbine is generating any energy at all.

This is another strange question and answer. I guess it makes sense that a wind turbine creates a high multiple of the energy that it consumes, because the marginal cost of fuel (wind) is zero. The issue is that this power is variable in time (possibly off-peak) and in quantity.

In general, wind energy in Illinois makes sense because most of Illinois is damn ugly. It is flat with cornfields and not much to look at. Actually the area near Lena, IL where these turbines are located is probably one of the prettiest parts of Illinois (admittedly, not saying much). But I don’t necessarily think that the wind farm is bad on the horizon, it is actually pretty cool. I don’t think that the wind farms significantly impact the farm economy; they take up some amount of land but not a lot of total acreage.

The issue too is cost efficiency. $200M was spent for 100 MW of capacity, and this “capacity” is when the wind is blowing at a consistent rate best for the turbines. I don’t know what the practical capacity of a wind farm is, it obviously depends on specific circumstances, such as how windy it is. We also would need to understand the useful lives of the gear; they had some trouble with blades made in India but likely they have this figured out in the most recent wind farms.

At least in Illinois we have a decent transmission corridor and it is located near some urban areas in Iowa. We probably will be seeing more of these wind farms in the future.
Cross posted at LITGM