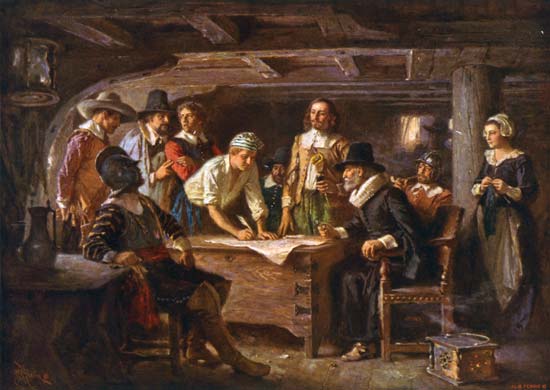 In the name of God, Amen. We whose names are underwritten, the loyal subjects of our dread Sovereign Lord King James, by the Grace of God of Great Britain, France and Ireland, King, Defender of the Faith, etc. Having undertaken, for the Glory of God and advancement of the Christian Faith and Honour of our King and Country, a Voyage to plant the First Colony in the Northern Parts of Virginia, do by these presents solemnly and mutually in the presence of God and one of another, Covenant and Combine ourselves together into a Civil Body Politic, for our better ordering and preservation and furtherance of the ends aforesaid; and by virtue hereof to enact, constitute and frame such just and equal Laws, Ordinances, Acts, Constitutions and Offices, from time to time, as shall be thought most meet and convenient for the general good of the Colony, unto which we promise all due submission and obedience. In witness whereof we have hereunder subscribed our names at Cape Cod, the 11th of November, in the year of the reign of our Sovereign Lord King James, of England, France and Ireland the eighteenth, and of Scotland the fifty-fourth. Anno Domini 1620.

We give you thanks almighty God for all the blessings you have given us. God bless all of our ChicagoBoyz contributors and their families, our readers and friends. God bless the many people who are travelling for this holiday, and grant that families will resolve their animosities and be at peace with each other. Thank God for the courage of the many people who came here over the centuries and gave us the strong, free and prosperous country we have so unworthily inherited, ruled by law and free association and cooperative effort, and not by the whim of the powerful. God grant that we may keep it well and leave it to our children and grandchildren even better than it was given to us. God bless our soldiers in Iraq, Afghanistan and other dangerous places, and may He have mercy on the ones who have been killed and strength and hope to the wounded and their families.