So it appears that we are to have a new federal holiday – that day, following on the final defeat of the Confederacy that slaves in Texas were informed by the arriving Union troops that they were now free. I think it’s marvelous, noting the day when the last slaves in a Confederate state were notified by Republicans that they were no longer slaves.

With apologies to Wm. Shakespeare…

A thought from the late and very great Neptunus Lex:

“I’ve often wished that you could split at each important choice in life. Go both ways, each time a fork in the road came up. Compare notes at the end, those of us that made it to the clearing at the end of the path. Tell it all over a tumbler of smokey, single malt.”

Newgrange is an ancient structure in Ireland so constructed that the sun, at the exact time of the winter solstice, shines directly down a long corridor and illuminates the inner chamber. More about Newgrange here and here.

Grim has an Arthurian passage about the Solstice.

Don Sensing has thoughts astronomical, historical, and theological about the Star of Bethlehem.

In the bleak midwinter, from King’s College Cambridge

The first radio broadcast of voice and music took place on Christmas Eve, 1906. (although there is debate about the historical veracity of this story)

An air traffic control version of  The Night Before Christmas.

A Christmas-appropriate poem from Rudyard Kipling

I was curious as to what the oldest Christmas carol might be:  this Billboard article suggests some possibilities.

Mona Charen, who is Jewish, wonders  what’s going on with the Christians?

The 2017 Christmas season, in combination with the Churchill movie Darkest Hour, reminded me something written by the French author Georges Bernanos:  A Tale for Children.

Here’s a passage I’ve always liked from Thomas Pynchon’s great novel Gravity’s Rainbow.  The setting: it is the grim winter of 1944, just before Christmas. The military situation in Europe is not good, and WWII seems as if it will never end. London is under attack by V-2 rockets and V-1 cruise missiles (as they would be called today.) Roger and Jessica, two of the main characters, are driving in a rural area in England and come upon a church where carols are being sung. They decide to go inside. 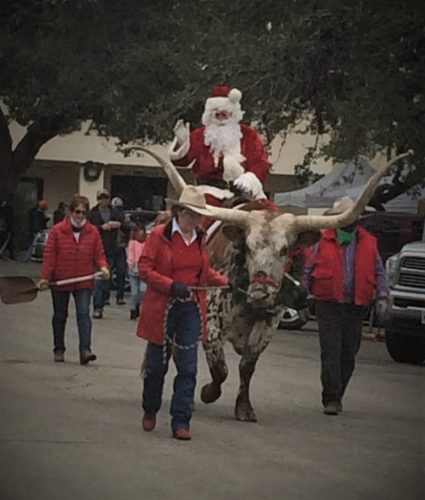 (Yesterday, at noon, at Christmas on the Square, in Goliad. A wonderful time was had by all, even the very tame longhorn.)

Surely the most famous case of morning-after newspaper reporting of an election was the Chicago Tribune’s Dewey Defeats Truman headline of November 3, 1948.  But the era of television was just beginning, and the tradition of televised and near-real-time election calls began with a corporate PR stunt.

In 1952, the Eckert-Mauchly computer corporation, which had recently been acquired by Remington Rand, suggested to CBS News that their Univac computer might be used for election-night projections. Univac, the first computer to be ‘mass-produced’ (46 were eventually sold and installed) was already becoming famous.  It was an awesome machine, weighing 8 tons and incorporating 5000 vacuum tubes.  Its internal memory capacity was a then-impressive 1000 words, or about 12 KB.  Price was about $1 million, in 1952 money.

Democratic candidate Adlai Stevenson was considered the favorite to win, although the election was expected to be close.  But at 8:30 PM, with only 5% of the votes counted, Univac issued its initial prediction:  100-to-1 odds for Eisenhower, with 438 electoral votes to Stevenson’s 93.  The CBS news director thought the prediction was ridiculous, and it was not aired.

Meanwhile, Eckert-Mauchly’s statistician (Max Woodbury) was entering data to reflect new returns as they came in….he may have also tuned the algorithm to give less-extreme results, though this is not clear.  At 9PM, Univac issued another prediction:  8-7 odds for Eisenhower…and this prediction was announced.

But then, Woodbury  discovered that he had added an extra zero to the Stevenson numbers for New York state.  After this entry was corrected, the machine gave the same answer as before: 100-to-1 odds for Eisenhower, with 438 electoral votes to Stevenson’s 93.  I can’t determine whether or not this revised forecast was televised or not, but the final result was an Eisenhower victory, 442-89 electoral votes.

Late at night, CBS correspondent Charles Collingwood made an embarrassing confession to millions of viewers: Univac had made an accurate prediction hours before, but CBS hadn’t aired it.

This election-night affair certainly helped solidify the idea that Univac was the name in computers…a nice PR win, though it didn’t seem to help the company very much in the end…and made computers and algorithmic predictions a regular feature of election-night reporting.  Today, of course, such predictions are a commonplace from media of all types.  And some of these media organizations seem to have developed a rather…exalted…opinion of their role.  In a tweet sent out on election day, 2020…and soon withdrawn..the New York Times asserted that:

The role of declaring the winner of a presidential election in the US falls to the news media.

Such ‘declarations’, of course, have no legal standing: they are merely estimates, as much as the varying 1952 CBS estimates were, and the NYT’s tweet was an assertion of arrogance and privilege, surprising only in that it was so out in the open.