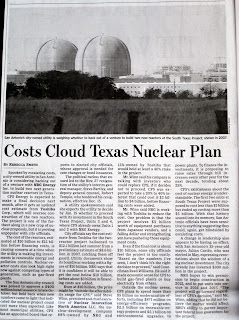 For the last couple of years there has been talk of a “renaissance” in nuclear power in the United States. The government has issued some loan guarantees to various parties and the greens are starting to come around to nuclear power because of greenhouse emissions. While I am a supporter of nuclear power and of investing in generating capacity in general, from the moment that this false hope started I have been steadfast in maintaining that virtually no new nuclear plants will be built in the US in the near term, meaning the next 5 or so years.

One other block against any sort of nuclear power investment is HISTORY. This article in today’s Wall Street Journal titled “Costs Cloud Texas Nuclear Plan” discusses the South Texas Project, a nuclear site in Texas that is owned today by municipal utilities in Austin and San Antonio, Texas and NRG, a public company that owns various generating assets around the USA.

The South Texas Project (STP) has 2 nuclear units today. NRG applied for federal financing to build 2 additional nuclear units at the site, as part of this “renaissance” of nuclear power.

The original STP project was subject to massive cost overruns. Per the article:

“skittishness about the cost of nuclear energy is understandable. The first two units at STP were supposed to cost less than $1 billion but ended up costing more than $5 billion. With that memory seared into its memory, San Antonio officials have been sensitive to anything suggesting that they could, again, get blindsided by escalating costs”

Note that the costs escalated by a FACTOR OF FIVE from the original estimate – $4B cost overrun in 1982 dollars translates into over $8B based on this “inflation calculator” I found on the web.

Now the initial estimates, which I said were ridiculously low in previous posts, are going up BEFORE THEY EVEN BREAK GROUND. This is a new form of escalation – they haven’t even dug in a shovel and already they are giving up on their original estimates, in a big way.

“Cost estimates for two-reactor project ballooned to $12.1 billion last summer from a preliminary estimates of $8.6 billion in 2007, catching them off guard. Utility documents say that the (San Antonio) Board was working with a figure of $10 billion”

It is important to realize that government- or municipal-owned utilities like San Antonio, Austin, the State of Tennessee (TVA), and many others were builders of a significant percentage of all the original nuclear fleet. As these cash-strapped entities balk at throwing money into the incredibly risky nuclear power business, one of the last cards in the deck for new nuclear plants goes away.

NRG, a public company that is has been a takeover target by Exelon as recently as the summer of 2009, still plans to go forward with this project on their own if necessary.

“NRG hopes to win permission to begin construction in 2012, and to put units in service in 2016 and 2017. “The project will go forward regardless of CPS’ decision”… adding that he did not believe the matter would affect NRG’s ability to garner important Federal loan guarantees for the project.

Really… I have better odds of being president in 2017 than this project has of being completed by that date, especially with the fact that NRG has been a habitual takeover candidate and most of the likely acquirers are financially savvy enough not to throw 100% of their capital down a black hole of nuclear construction beset by NIMBY’s and continually-shifting government regulations. In a sick way maybe NRG is plowing forward with this project alone just to be so toxic that no one would think of acquiring them, because then they’d have to face the ballooning costs of this venture.

Once again, this is a sad post because I am a big fan of nuclear energy, but it is important to be realistic in what can be done in the current legal and financial climate. In addition, the fact that the media were cheerleaders in this impossible fantasy just shows that they have no idea what they are talking about. The WSJ was a bit less sanguine than the rest, but frankly they should put up an editorial piece bemoaning the sad state of power generation capacity in the US and our lack of plans to set it right.