Back when Dan and I were invited over to Chicago Boyz they mentioned my posts on taxation and the energy industry as particularly interesting. Over the last few years I have not written that much on tax policy, because the news has been so uniformly bad that it is quite depressing to contemplate.

This article from the Wall Street Journal is titled “Escape from Taxation” and reviews the negative impact on the state of New Jersey caused by ever-increasing state income tax rates. As you can see in the table, the highest marginal tax rate on income in New Jersey has increased from 2.5% in 1976 to 10.75% in 2009. New Jersey’s growth used to be in part attributed to its lower tax burden when compared to New York state; today that gap has been (mostly) erased and with it has gone inbound migration of wealthy individuals and corresponding growth. 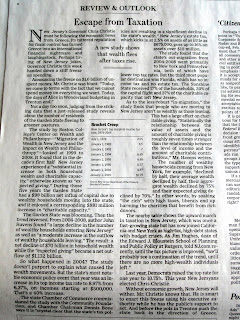 There are different types of tax burdens and they can be mitigated to varying degrees. Federal income taxes cannot be avoided by moving between the states, but as a resident you “implicitly” choose your 1) property tax burden 2) sales tax burden 3) state tax burden 4) estate tax burden. When these burdens are considered in total, one way to measure the state’s competitiveness is “tax freedom day”, which is the day in the year when you have finished paying off your consolidated tax burden (state, Federal and local) and start earning money for yourself. In 2009, according to the Tax Foundation, this date for New Jersey is April 29, the latest in the nation with the exception of Connecticut at April 30. Note that even New York is ahead of New Jersey now, with a date of April 25 (down from a high of May 8 two years ago). And without being condescending, New Jersey has to have some advantage over New York in order to attract citizens.

Of all the taxes, however, state income taxes have the most perverse impact on entrepreneurial activity. High income earners, who can choose where they want to live and invest in businesses, look closely at the state income tax rate since this rate goes up with their earnings and there are alternatives where this tax can be completely avoided.

To put this in perspective – property taxes are interesting to the wealthy but not a source of tension to the degree that they’d move. Whether it is a few thousand or fifty thousand on their mansions that is a cost that they can modulate depending on the nature of the property they own and this is more of a ‘fixed cost’ that doesn’t increase with earnings. Sales taxes impact them to a lower degree because they consume less as a portion of their total income (and since they are mobile they can often avoid sales taxes on art and jewelry through creative purchasing). Income taxes, however, go up infinitely with their earnings and are viewed as a particular burden since they can be avoided completely merely by changing residency. Many states, such as Florida (cited in the article above as a big source of fleeing New Jersey citizens) have ZERO state income taxes; if you are earning millions this is a very significant difference in your pocketbook (relative to sales and property taxes).

High state income taxes will drive the wealthy out; this is a stone-cold fact and this article only shows the latest instance of this to be tracked, which is the out-migration of higher income earners from New Jersey. The net population loss doesn’t tell the whole story; rich individuals are leaving, and being replaced by poorer individuals. This will have a chain reaction on the state, since the level of state workers and services was set during the high water mark of the economic peak and cuts from there will be painful to implement (for the best example of this see Detroit which has a large number of city workers and rich deals for their salaries while the thriving economy that once supported them has long since drained away). Another impact is an estate tax in New Jersey at up to 16%; this also will be another push for the wealthy elderly to leave the Garden State (other than the weather, of course). Like the state income tax, this estate tax (beyond the Federal estate tax) can be avoided or minimized by moving to another state with more favorable rates.

Driving out the wealthy has additional follow-on effects; less new businesses being started (since they are the entrepreneurs), less money for local charities, and a “death spiral” effect where rates have to keep being raised on the remaining citizens in order to keep the level of state services constant (remember, the state workers all get raises every year, and all keep their jobs, even while your business cuts back).

The new governor of New Jersey has his work cut out for him; a stupefying state income tax rate, a virtually bankrupt state, and state workers used to receiving constant raises and gold-plated benefits and ready to oppose him at every turn.

New Jersey has to be made more fiscally competitive to nearby states or they will lose to them and then inexorably lose older and wealthy residents to other states with better weather and more favorable tax regimes. Of all Illinois’ problems, about the only thing Illinois does right is having a state income tax rate of 3%, which makes it very competitive with these sorts of states. Sadly enough, it is probably only a matter of time before this rate is raised, making Illinois competitiveness even poorer against the other states.