It’s an interesting idea. It uses the iPhone’s accelerometer to monitor the motion of your bed while you sleep. Like so:

It uses the motion of the bed as a proxy measurement for your REM states. When you’re not moving much you are more likely to be deep asleep and when you move more it means you’re more likely nearly awake. You set a 30 minute time window in which you wish to awake and the app wakes you up when your motion peaks so you wake up alert instead of dragging yourself up out the depths of REM and starting the day feeling vaguely stunned.

It’s a neat idea and the basic idea is scientifically sound but that’s not what I’m blogging about.

I’m not even blogging about the other feature in which the app graphs your sleep patterns so you can see when you’re deep asleep and when you’re not. That’s pretty nifty.

However, check out the blue button in this screenshot of the sleep pattern graph screen. 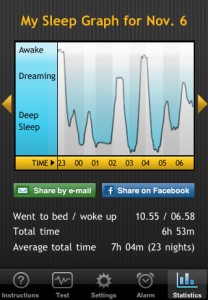 What the –? Share on Facebook? I think this is taking the whole transparent internet life thing a tad too far.

I guess I’m old fashioned but I’m not putting a graph of my sleep/bed-motion up on the internet.

Especially, if the graph has some high frequency, sinusoidal sections (if you know what I mean, wink, wink, nudge, nudge.)