Energy Futures Holdings (EFH) is a large utility based in Texas that used to be TXU. They were taken over by private equity in one of the largest buyouts during the “peak year” of 2007. I wrote about them here as they began to have problems repaying their monstrous pile of debt which mainly comes due in 2014. If you go to this file on EFH’s web site and go to page 12 you can see the $20B in debt coming due on that date (EFH is privately held and thus does not have a stock ticker but since their debt is publicly held they do have analyst presentations). 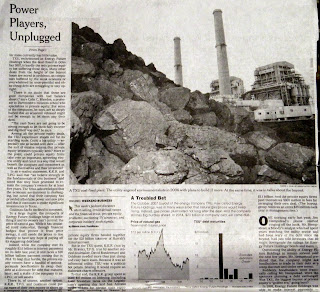 The New York Times wrote an article on the EFH buy out titled “Power Players, Unplugged” on February 28, 2010. While we may take the NY Times to task from time to time on politics in general I find their business writing to be of high quality.

They sum up the deal as so:

The buyout was, in effect, a gargantuan bet that natural gas prices would keep climbing; instead, plunging prices coupled with a hobbled national economy have cut into the cash the company generates.

Investors who bought $40B of TXU’s bonds and loands – including legendary wise men like Warren Buffett – have seen huge losses as most of the bonds trade between 70 and 80 cents on the dollars. The other $8B used to finance the buyout came from the private equity investors themselves… analysts say that this latter stake currently has little value.

This is fairly accurate. As I noted in many posts, the market clearing price for electricity is set by the price of natural gas. All of the nuclear plants run, and almost all of the coal plants run, but the price that they receive from the market depends on the marginal cost of power for the last plant turned on, which is typically a gas “peaking” plant. While the price for natural gas went as high as $14 / unit, it now trades around $4 / unit, due to the fact that huge volumes of new gas were found in the US and we also have the ability to import natural gas (LNG) from abroad. I write about the fall of natural gas prices here.

Gas prices typically spike up during the winter (it is a fuel primarily used for heating) and then fall during the summer, when utilities use this time to refill their storage with cheaper summer gas. If the winter is over and natural gas prices are around $4 / unit, this likely bodes for a further price cut this summer, when Texas gets hot again and EFH has to make up the bulk of their profits. If these prices stay low or go even lower, which seems likely, then EFH will see their margins cut significantly on their nuclear and coal generation, which will further compromise their ability to save money to pay off the huge pile of debt that comes due in 2014.

While the NY Times goes through the politics that EFH used to convince regulators and others in Texas to allow the utility to go private, they fail to hit on the most interesting part of the story – the fact that this is one of the few leveraged buy outs that I am aware of that didn’t bring any significant ideas to try to run their new quarry more efficiently. Basically their plan was to drop new investment in coal generation(TXU was going to build 11 coal plants, but when EFH went private they agreed to drop 8 of these and just complete the 3 that were in progress, which threw a “bone” to the green crowd)and then apparently hedge the price of natural gas and try to cover the huge debt burden with increased cash flows, I guess.

Anything can happen and perhaps EFH will be able to “force” creditors to roll over their debt positions into new debt with longer maturities and then they can just continue running the utility and hope that demand re-surges and the price of natural gas, too. This is basically a strategy of not investing in incremental generation (unlike TXU, which was betting big on cheap Texas coal) and hoping that rising gas prices allow them to make a fortune off their paid-for-by-ratepayers nuclear and older coal plants.

The NY Times gets it right with this final quote, about what is likely to happen to those that lent money to EFH:

But recent history suggests that when it comes to troubled megadeals of the golden age of private equity, debt investors often come up short. TXU is not likely to be an exception. In these deals, says Mr. Blaydon of Dartmouth, “the debtholders are going to get hosed”.

The equity holders have already been hosed, but since they are private equity kingpins, no need to shed a tear for them.

As far as the customers of EFH in Texas, it is hard to see what the value of this buy out was for them. Way back when this deal was first consummated in 2007 I wrote of an unholy alliance between the greens and the financiers which came to pass. If EFH stumbles and can’t refinance their debt the state will have to do something to keep this major entity solvent; they can’t allow it to just be seized by creditors and sold for parts. We will see how this story turns out.