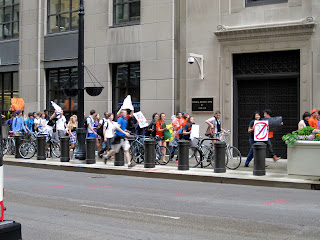 On May 5th I was walking through the Loop when I saw a long line of kids chanting and holding signs. Per this article it was an organized walk-out of about 700 Chicago Public School students to protest education cuts needed to close Illinois’ massive budget deficit. The “no 37” signs are referencing the fact that class sizes may go up to 37 students as a result of these cuts.

I read the article and the “journalist” who is covering the protests talks to students and they mention how their after-school programs are getting cut and that more students in a classroom means that the teachers will have less time to spend with each of the students.

What was interesting to me is that the article DID NOT mention that there were many teachers and non-students among the protesters. I could see them in the crowd, although the majority of the protesters were students. Obviously the teachers have their own motives for pushing back on financial cuts, including their own pay and job security. It does look much more convenient to have the students out front rather than the unionized teachers demanding that, although the state is broke, and their pensions are a significant cause of what is wrecking the state financially, that they shouldn’t bear any of the fiscal belt-tightening that is inevitable for Illinois in the future.

I also want to know if this message of teaching the students to agitate for more taxpayer funds is really a lesson that we should be imparting; the governor is proposing a 33% tax hike and he puts education on the block first because he knows that it is the part of the budget that will rile up the largest part of his political base (a variant of the “Washington Monument” strategy), rather than actually trying to tackle the core issues that are driving our state into financial insolvency. The students are pawns in this game, and demanding that taxes be raised on other people rather than sharing in the communal pain after our fiscal profligacy is a sad lesson to be teaching.