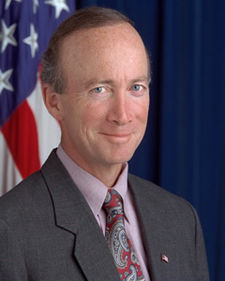 Michael Barone reports that Dan Coats has hinted that Mitch Daniels is “definitely considering” a run for president in 2012.

That sounds pretty tenuous. But … . I cannot believe that an insider like Coats would have told this to a major pundit and journalist like Barone unless it was serious, and unless it was authorized. It must mean that Daniels is allowing this idea to be floated. So, I take it as a serious piece of news.

If this is true, I am starting to go from “meh” to “whatever” to … actually happy about the prospects for 2012. Mitch is the only Republican who I am enthusiastic about, rather than just voting for anybody-but-Obama.

(Mitch is like the original, more experienced version of one of the few politicians I have ever actually voted for with gusto, Adam Andrzejewski who recently lost the GOP primary here in Illinois. See Adam’s site For the Good of Illinois. We have not heard the last from Adam.)

Mitch is an experienced guy in a throw-the-bums-out election. But unlike most of the insiders and hacks who want to tout their “experience” Mitch’s experience is as a budget cutter and hard-nosed financial realist, who is not from Washington, and who has serious business experience. His resume is almost uncannily perfect. He is a guy that Tea Party people and regular GOP loyalists can all get behind. He won in Indiana the same night Mr. Obama did, which shows he has strong appeal to independents.

As Mr. Barone notes, Mitch would be a very formidable candidate indeed.

And I think, even more importantly, Mitch would be a very effective president.

A lot of us have been waiting for Reagan, Part II. Both Bushes were duds, especially the kid, who spent money with both hands. Reagan himself had to subordinate domestic reform to winning the Cold War. Mitch has the potential to be Reagan II: The Revolution Begins Again. Except this time there is no USSR to worry about, and with a guy who is willing to get into the weeds on domestic programs and budgets and make the numbers work. (I loved Reagan, but let’s face it, he was incapable of bean counting.)

I keep hoping that the Barack and Nancy and Harry Variety Show, currently enjoying abysmal ratings, is about to be cancelled. Fingers crossed. People seem to be waking up. Even the hacks in the GOP, who just want to have their snouts in the trough in front of the Donks, are seeing that their days are numbered, and they have to change their ways or get new jobs.

The stars are shaping up into a very good configuration.

I suppose it is a little too early to put out a yard sign … .